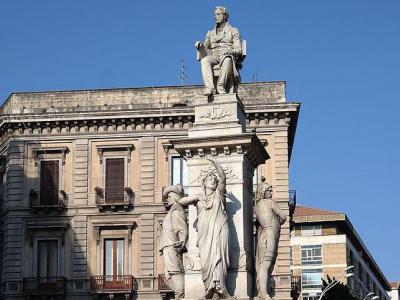 Doh, re, mi, fa, so, la, ti; seven notes, seven steps up the pyramid monument to Vincenzo Bellini. Atop a column atop the pyramid Vincenzo sits. He's like a professor. With a manuscript on his knee he sits and ponders the Church of Saint Agatha at Fornace. He venerated her all his short life. He died at 34 in 1835.

The monument was designed and sculpted by Giulio Monteverde. It was unveiled in September 1882. Some say the monument should have been in the Bellini Square, across from the not yet finished Massimo Bellini Theatre. Others wished they would replace the elephant with the composer in the Cathedral Square. But no, he is with his saint.

Below the composer, around the pyramid are four statues representing four of his operas: Norma, I Puritani (The Puritans), La Sonnambula (The Sleepwalker) and Il Pirata (the Pirate). The entire monument is enclosed in an iron art nouveau fence.
Image Courtesy of Wikimedia and Luca Aless.