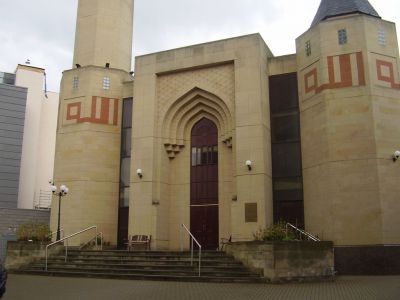 Edinburgh is a multi-religion city and you will find the Mosque and Islamic Centre on Potterrow.

The mosque was designed by Basil Al-Bayati and opened in 1998. The exterior has traditional Islamic features, but also touches of the Scot Baronial/Gothic Revival style. The main hall is large and sparsely decorated, with two chandeliers, a carpet and chairs for the elderly and disabled. It has two side entrances and the women’s galleries above overlook the hall. Out of respect for the religion, the main hall and galleries are not open to non-Muslims.

The main hall is used for Jumu’ah and Salah. A second, smaller hall is mainly used as a storage area, but is cleared out for special events. The centre also has an extensive library where you can either borrow or buy Islamic books. There is also a long table and seating area where Arabic and Koran classes are held and where lively discussions take place.

The ablution rooms are off to one side, and are separate for men and women. Another, newer ablution room is where the traditional washing and enshrouding of the dead takes place before burial.

The Mosque Kitchen is open to the public and you can either buy a takeaway or enjoy your meal at one of the outdoor tables. The food is, of course, halal and you can choose between Southern and Middle-Eastern Asian menus.
Image by Wajihaq on Wikimedia under Creative Commons License.