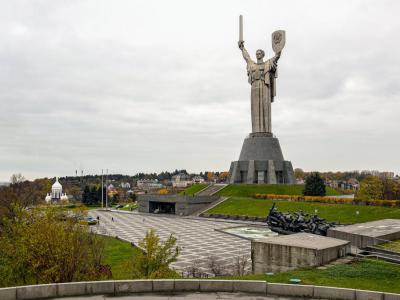 The Mother Homeland Monument is a titanium statue which commemorates the USSR’s victory in the war against Nazi Germany of 1941-1945. The statue presides over the Museum of the Great Patriotic War’s exhibition hall, rising to 102 metres (335 ft). The monument represents a woman who holds in her right hand a sword, and, in her left hand, a shield with the Soviet Union national emblem. The sword measures 16 metres (52 ft); the shield - 13 by 8 metres (43x26 ft). Legend has it that the sword had to be slightly curtailed so as not to overreach the cross of the nearby Kiev Pechersk Lavra (Kiev’s most important religious site and residence of the Orthodox Metropolitan).

The monument was designed by Yevgeny Vuchetich and inaugurated in 1981, simultaneously with the museum. Soon after its inauguration, the statue became a major local landmark, dominating Kiev's skyline, and a must see for guests of the Ukrainian capital.
Image by ~FLO on Flickr under Creative Commons License.