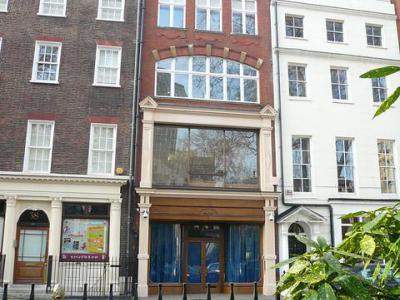 MPL Communications is Paul McCartney’s music publishing company since 1970, headquartered here at Number 1 Soho Square in an elegant 18th-century building. Not many people know it, but McCartney is the world's largest independent song publisher, owning rights to more than 3,000 songs and Broadway shows, including Buddy Holly’s catalogue. While accountants administer his musical properties, he oversees various creative projects.

There's also a recording studio in the basement (an exact replica of EMI No. 2) and although fans are not allowed to visit the premises, this is where you might catch a glimpse of Macca himself during your tour of London (as usual, he might be highly elusive or surprisingly accessible as the moods takes him).

Pass by at night and, if the curtains are open, you'll see a wall completely covered in gold and platinum discs in the upper floor office.
Image by james on Flickr under Creative Commons License.