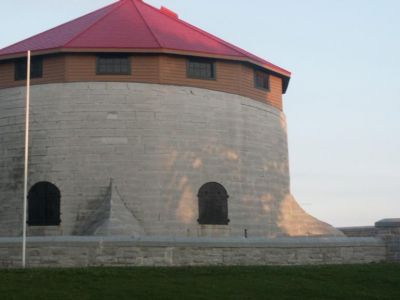 Murney Tower is a Martello tower in Kingston, whose construction dates to 1846 and the Oregon crisis. Its builders intended that Murney Tower complement the fortifications of Fort Henry. The tower stands surrounded by a dry ditch and is accessible only by bridge. Murney's walls are about 3 metres thick on the land side and up to 5 metres thick on the lakeside. The main floor (ground level) was the barracks level and has two cannons pointed out shuttered windows. The lower floors were the magazine and storage and gun turrets to shoot at anyone inside the ditch. The top floor is the gun platform with one large cannon that can be rotated along an iron rail.

A “rapid removal” roof was later added to protect the gun and keep out the large amounts of snow that did not figure into the mediterranean design of the tower. This is a common feature on Canadian Martellos. Murney Tower is a National Historic Site of Canada, managed and maintained by the Kingston Historical Society, who operates it as a military museum during the summer months (May - End of August). Displays include cannons, uniforms, Lee Enfields, and other mid 19th century military artifacts.
Image Courtesy of Wikimedia and Carlb.
Sight description based on Wikipedia.