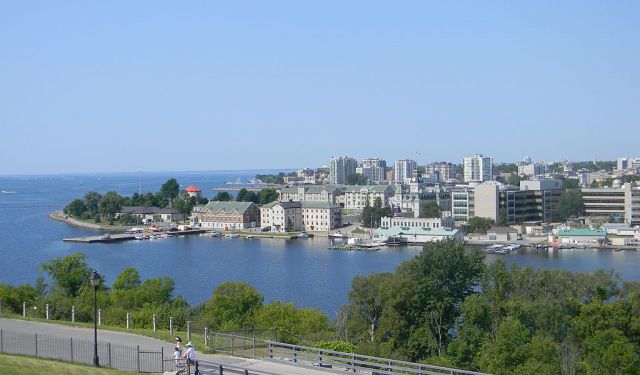 The historic city of Kingston boasts a variety of fascinating landmarks. You can enjoy the beautiful architecture of City Hall, tour Old Queen's University and visit parks that offer a picturesque view of the sea. Take this orientation walk to visit some of Kingston's most famous attractions.
Image Courtesy of Wikimedia and Laslovarga.
How it works: Download the app "GPSmyCity: Walks in 1K+ Cities" from iTunes App Store or Google Play to your mobile phone or tablet. The app turns your mobile device into a personal tour guide and its built-in GPS navigation functions guide you from one tour stop to next. The app works offline, so no data plan is needed when traveling abroad.

Kingston's City Hall was built in 1844 out of limestone and was designed in the Classic style. It features arched windows and a beautiful dome. The dome has 16 windows and four clocks that face each cardinal direction. The building's Memorial Hall has 12 stunning stained glass windows. These beautiful windows are dedicated to Canadian soldiers who have died in combat.
Image Courtesy of Wikimedia and Andrew MacKinnon.
2

Kingston Market is centrally located behind City Hall. The market was founded in 1801 and is one of oldest markets in the country. It attracts thousands of locals and tourists. Many vendors participate in the market, and you can find everything from artwork and antiques to fresh food and souvenirs. If you need a break, relax at one of the bistros at the market. The market is open from 8:00 a.m. to 6:00 p.m. from April to November on Tuesdays, Thursdays and Saturdays.
Image Courtesy of Flickr and Marcus Jeffrey.
3

St. George's Cathedral is where the Anglican Diocese of Ontario is located. The original church, built in 1792, was made of wood. The building that you see today was constructed from 1825 to 1828. It is a large and impressive building that earned the status of cathedral in 1862. The cathedral features a large, beautiful dome, an elegant entrance decorated with columns and a magnificent interior. There are also large stained glass windows that are true works of art. The church boasts excellent acoustics, and many musical concerts are held here.
Image Courtesy of Wikimedia and SimonP.
4

The Pump House Steam Museum is located on the waterfront. It educates visitors about the Industrial Revolution as it relates to Kingston. The museum is designed as a Victorian-style water-pumping station from 1849. There are a variety of steam engines and miniature models of these engines on display. Of particular interest is an engine that dates back to 1897. The museum is open daily from 10 a.m. to 5 p.m., Thursday until 8 pm.
Image Courtesy of Wikimedia and F.A. Brockhaus, Berlin und Wien.
5

Murney Tower is a Martello tower in Kingston, whose construction dates to 1846 and the Oregon crisis. Its builders intended that Murney Tower complement the fortifications of Fort Henry. The tower stands surrounded by a dry ditch and is accessible only by bridge. Murney's walls are about 3 metres thick on the land side and up to 5 metres thick on the lakeside. The main floor (ground level) was the barracks level and has two cannons pointed out shuttered windows. The lower floors were the magazine and storage and gun turrets to shoot at anyone inside the ditch. The top floor is the gun platform with one large cannon that can be rotated along an iron rail.

A “rapid removal” roof was later added to protect the gun and keep out the large amounts of snow that did not figure into the mediterranean design of the tower. This is a common feature on Canadian Martellos. Murney Tower is a National Historic Site of Canada, managed and maintained by the Kingston Historical Society, who operates it as a military museum during the summer months (May - End of August). Displays include cannons, uniforms, Lee Enfields, and other mid 19th century military artifacts.

Image Courtesy of Wikimedia and Carlb.
Sight description based on Wikipedia.
6

Break Water Park is located at the waterfront. It offers beautiful views of the lake and is a pleasant place to go for a walk. The Kingston City Statue, or the Time Sculpture as it is called, stands at the entrance to the park. The sculpture was built in 1973 and was a gift to the City of Kingston from the Province of Ontario.
Image Courtesy of Flickr and Jim Vance.
7

The University District (also referred to as the Student Ghetto) is a neighbourhood in Kingston, Ontario, Canada. It encompasses and surrounds Queen’s University and is largely inhabited by students and employees of the University. The area is officially bound by Nelson & Collingwood Street to the west, Princess Street to the north, Division & Barrie Street to the east, and King Street to the south. The University District is characterized as one of the most diverse, walkable and lively neighbourhoods in the City of Kingston. Within its borders, Queen's University offers publicly accessible athletic facilities, art galleries, museums and libraries. The District also contains other institutions such as KCVI, Kingston General Hospital, and many local businesses. The density of rental housing for students in the area coupled with its very close proximity to the university makes its existence a pull factor for prospective students who are considering attending Queen's. Throughout its history, the area has had a reputation of being loud and active, especially on weekend nights and during the annual Homecoming celebrations. Over the years, this created a significant amount of tension between students and non-student residents. Today, strong partnerships exist between City staff, City councillors, the Alma Mater Society, the Kingston Police Force, and Queen's University, which have largely curtailed these issues.
Image Courtesy of Wikimedia and YourmuniciPAL.
Sight description based on Wikipedia.
8

The Agnes Etherington Art Center displays both modern art and art from centuries past. It is run by Queen's University and opened in 1957. The center was named after Agnes Etherington, a prominent supporter of the arts at Queen's University. She donated her beautiful Neo-Georgian mansion to Queen's University for the purpose of housing the art center. The center has a large, permanent collection of around 14,000 pieces, which includes work from the 14th century to the present. There are paintings, sculptures, and illustrations created by famous Canadian and European artists on display, in addition to the center's temporary exhibitions.
Image Courtesy of Wikimedia and Rembrandt.
9

Grant Hall is a landmark on the campus of Queen's University in Kingston. It is located on University Avenue, just north of Bader Lane. Funds for its construction were raised by the Queen's student government to honour the legacy of then-Principal George Munro Grant. It has been used as a symbol of the university. Many ceremonial events, plays, and concerts take place in Grant Hall. As it is mainly a convocation hall, classes rarely take place within its walls, although it is used for exams. For a time during World War I it was also used as a military hospital.
Image Courtesy of Wikimedia and Skeezix1000.
Sight description based on Wikipedia.
10

Queen's Theological College is located on the Queen's University campus and is housed in Theological Hall, one of the university's oldest buildings. The hall dates back to 1879. It was constructed using money donated by local Kingston residents. It is a massive limestone structure designed in the Norman Romanesque style. Be sure to note the double-oak front doorway and the central tower topped with the Canadian flag. The building also features an ornate, medieval-style Convocation Hall, as well as the Morgan Memorial Chapel. In the chapel, you can see old-world vaulted ceilings and admire ecclesiastical stained-glass windows painted with scenes from the Hebrew Scriptures and the New Testament.
Image Courtesy of Wikimedia and icecafe.
11

Douglas Library is an academic library at Queen's University that serves the university's science and engineering faculty. Several floors of the building are underground, as buildings taller than the Grant Hall Clock Tower were once prohibited. The top floor of the library is magnificent and features stained glass windows.
Image Courtesy of Flickr and Marcus Jeffrey.
12

The Joseph S. Stauffer Library is the main social science and humanities library of Queen's University in Kingston. Construction was completed in 1994 at a cost of C$42 million, funded partially by the Ontario government and the Joseph S. Stauffer Foundation. The library is the largest building on the University campus, with Postmodern architecture referencing the Neo-Gothic style. It won the 1997 Governor General's Award for Architecture.

Stauffer Library is the most popular place at Queen's University for students to study. Its popularity has given it the nickname "Club Stauff" amongst Queen's students. Each floor of Stauffer is known for its typical users. Many groups use the first floor because of its convenience and comfort. The second floor is usually filled with Commerce students who are studying their required readings. This floor is also home to the Fireplace and Art Collection rooms. The third and fourth floors are the quietest as they are furthest from the lobby. There is a large group of loyal fourth floor studiers because of this.

Image Courtesy of Wikimedia and Shin.
Sight description based on Wikipedia.
13

Frontenac County Courthouse was built from limestone in the 19th century. This Neo-classical building features a two-story front portico with elegant columns. The central part of the building has three floors, and the wings each have two floors. The courthouse is topped with a dome that has 16 arched windows, and there are cupolas and ribbed domes on the end pavilions. An ornate fountain was placed in front of the courthouse in 1903. The building is registered in Kingston as a historic landmark.
Image Courtesy of Wikimedia and Andrew MacKinnon.
14

Chalmers United Church is a beautiful and impressive church in the historic heart of the city. It is located near the famous Queen's University on Clergy Street. This church was built in 1890 and is a Free Presbyterian Church. It was named after Thomas Chalmers. The building is charming with its domed windows and elegant balconies on the tower of the church.
Image Courtesy of Wikimedia and SoftwareSimian.
15

St Mary's Cathedral, built in 1842, is also called Kingston Cathedral. It is a historic cathedral located downtown. The cathedral has magnificent stained glass windows that depict biblical scenes, including the salvation of humanity by Jesus Christ. There are also beautiful icons at the cathedral that are true works of art. Be sure to see the cathedral's St. James's Chapel, which features sculptures of the first six bishops of Kingston.
Image Courtesy of Wikimedia and SoftwareSimian.
16

Princess Street is a major arterial road in Kingston, Ontario, Canada. As the main retail street of downtown Kingston, it is lined by many historic limestone buildings such as St. Andrew's Presbyterian Church, served as first meeting place of the Board of Trustees of Queen's College, The Commercial Mart Building, served as an army barracks, a public works building and a store, The Grand Theatre, serving as the home of the Kingston Symphony etc.
Princess Street begins at Kingston's current western city limits in Westbrook (continuing from Main Street, Odessa) and ends at the downtown waterfront east of Ontario Street.
The area at the intersection of Princess and Division Streets is known as The Hub. This area is known for its numerous bars and nightclubs that cater to the student population.

Image Courtesy of Wikimedia and Chensiyuan.
Sight description based on Wikipedia.