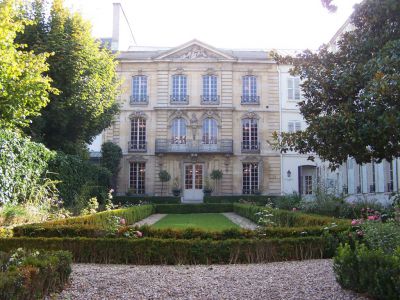 If you haven’t got enough time to visit all of Versailles, or if there are too many people queuing up to visit the Chateau, or if you are quite simply overwhelmed by the history of this famous area; then the Musée Lambinet is the place to visit.

The museum is housed in the Hôtel Lambinet, a hôtel particulier, which means a very grand townhouse for the nobility. It was designed in 1751 by Elie Blanchard for Joseph Porchon, a wealthy constructor. On the garden façade the pediment bears a sculpture representing Architecture. The hôtel was built on the site of a drained lake.

In 1852 the townhouse was bought by Jean-François Lambinet, who had been the Mayor of Versailles until 1848. The building was bequeathed to the town by his heirs in 1929 and it became a museum in 1932.

The museum’s 35 rooms have been intelligently divided into three sections: the first part is dedicated to fine arts from the 16th to the 20th century. The second section has a beautiful recreation of an 18th century apartment with decorative art, furnishings and paintings typical of the epoch.

The third section deals with the history of Versailles, its beginnings, its place during the Revolution and the 1st Empire and the influence its inhabitants had on the outcome of the American War for Independence.

You will see maps, plans and charters, all with explications that will help you to understand not only the beauty of Versailles but also the important role the kings of France played in the shaping of our society.
Image Courtesy of Wikimedia and Henry Salomé.