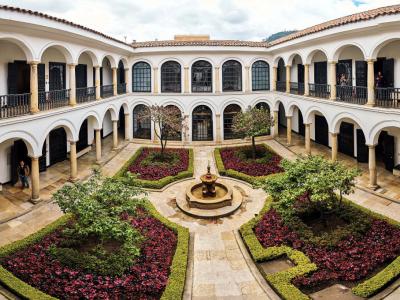 The building housing the art collections of Fernando Botero is a rebuilt of the 1733 palace of Archbishop Antonio Claudio Salvarez de Quinonez. After his passing in 1736, the building served as a residence for several bishops of Santafe. In 1862 right-wing revolutionaries burned the palace. In 1882 the archives were destroyed by a mob.

In 1948 the palace was completely demolished by rioters during the Bogotazo, the violence following the assassination of President Gaitan. The ten years of chaos that followed became known as the time of "The Violence". The land was acquired by the Bank of the Republic, and the palace was rebuilt in 1955.

Under the custodianship of the Bank of the Republic, the rebuilt palace is impeccably maintained. As many as 1,000 people a day visit the museum. The Botero Museum is also a venue for lectures, workshops, and conferences. It is located at Street 11, number 4-41 in the historic neighborhood of La Candelaria.
Image Courtesy of Flickr and Pedro Szekely.