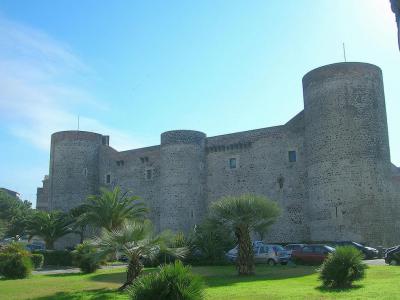 The Ursino Castle ("Bear Castle") was built in the 13th century. It was meant to be a royal castle of the Kingdom of Sicily. During the time of the Sicilian Vespers it became the home of the Sicilian Parliament. It has remained in good condition and it currently serves well as an art museum.

The castle is laid out in a rectangle. It has four circular towers at each corner and an open air courtyard. On the ground floor is the Arms Room. The Arms Room houses the ticket office and a large collection of weapons. Other rooms on the ground floor house various Greek and Roman antiquities, including statues, figurines, vases and mosaics.

The Open Space is a large room for temporary exhibitions and sculptures. A neighboring room houses numismatics and engravings.

Like the castle, the collections are vast. The Museum is a definite "must see" for art and history lovers.
Image Courtesy of Wikimedia and Triquetra.