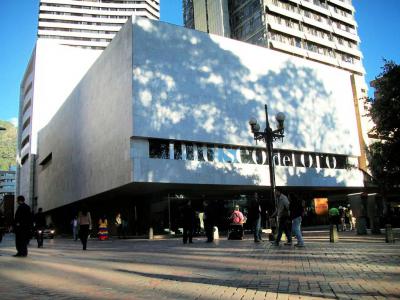 Since 1934 the Bank of Republic has played an active role in the protection of the archeological treasures of Colombia. The first object of art in the collection supported by the bank was the poporo quimbaya.

The poporo is a utensil used by the indigenous people to store bits of lime derived from seashells. The lime was chewed with coca leaves, as a sacred ritual of the first people. The poporos are credited with spiritual power and social status. The poporo quimbaya has become famous and is now an important part of Colombian cultural identity.

The museum houses the Muisca Golden Raft. Found in Pasca in 1969, the raft was used in the coronation of a new Ruler of the Muisca federation. As of 2008, after renovation, the museum had organized five rooms for golden objects and an auditorium. There is also a cafe, a restaurant, and a souvenir shop.

The museum currently has about 55,000 pieces with nearly 6,000 on display. Many of these items were used in the daily life or sacred rituals of indigenous peoples like the Muisca and Tayrona. On the first floor are the main reception hall, the shop, and the restaurant. The exhibitions are on the second and third floors. The second floor is titled "People and Gold in pre-Hispanic Colombia." The halls are dedicated to different cultures and civilizations, such as Calima, Quimbaya, Muisca, Zenu, Tierrandentro, San Agustin, Tolima, Tairona, and Uraba. There is one room called "After Columbus."

The third-floor exposition takes off in a different direction. Shamanism is represented by the "Flying Shamanic" and "the Offering." In the Profunditation Room, at the end of the exhibit, are shown videos about the most important pieces on display. Almost all the exhibits are in English and Spanish.

The museum is located on Avenue 6, number 15-82. It is open Tuesday to Saturday from 9 am to 6 pm, and on Sundays from 10 am to 4 pm. Touring the whole museum will take about four hours.
Image Courtesy of Wikimedia and Felipe Restrepo Acosta.