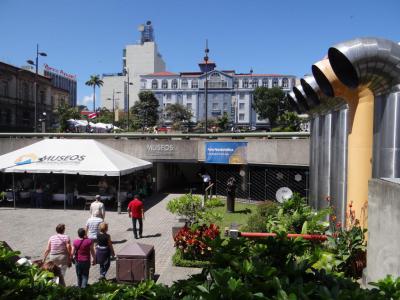 The Pre-Columbian Gold Museum is located in a subterranean building underneath the Plaza de la Cultura and is managed by the Costa Rica Central Bank. The museum has a substantial collection of over 1600 Pre-Columbian gold artifacts dating back to 500 AD.

The National Coin Museum is also located in the same building on the ground level and features displays dating back to 1236 AD, including coins, banknotes and unofficial items such as coffee tokens. You can see the first coins created Mexican Mint which were established in 1535 by Spanish viceroy Antonio de Mendoza by a decree from the Spanish Crown to create the first mint in the Americas.

The mint's silver eight-real coins and its successor coin, the silver peso, circulated widely in the Americas and Asia well into the 19th century and became the basis of the modern national currencies of many countries in these parts of the world, including the United States Dollar.

The museum is relatively small, but the items on display are very interesting and extremely informative. This museum is a must-see in San Jose.