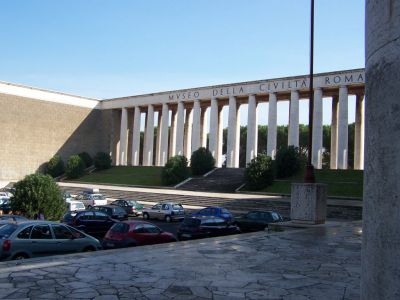 The EUR district in Rome is rich in culture with its many museums and the best one, that you really shouldn’t miss visiting, is the Museum of Roman Civilisation. This fascinating museum is dedicated to Ancient Rome from its foundation to the 4th century, and is separated into three sections that are full of interesting cultural artefacts and models.

In the Historical Section you will find a history of Roman legends, explaining how the ancient city was founded, you can see items of primitive culture and learn about the conquest of the Mediterranean area and the spread of the empire. There are interesting details about the famous Roman Legions, the emperors and the arrival of Christianity – the first step that made Rome the seat of the Catholic faith. The Thematic Section deals with the daily life of early Romans; their agriculture, literature, medicine, music and schools. There is also a magnificent series of plaster casts of the Trajan Column, showing the frieze in bas-relief that runs from the base of the column to the top. These casts are set out horizontally on eye-level for easier viewing. The third section of the museum is by far the best. Here you will find an amazing plaster model of 4th century Rome. This scale model has incredible details and took Italo Gismondi, its creator over 35 years to complete.
Editor's note: The museum is temporarily closed for renovation.
Image by Remo on Wikimedia under Creative Commons License.
Sight description based on wikipedia