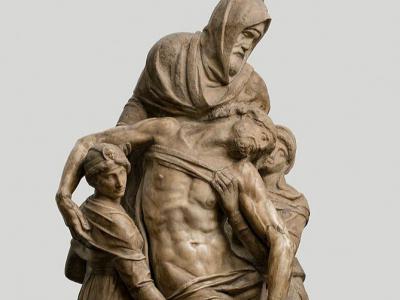 It would be a colossal mistake to go to the Duomo and not explore this museum. Due to the abundance of wonderful attractions in Florence, it gets less attention, but there are quite a few things to like here, including the relative lack of crowds, reasonable size and hours of operation, large open spaces with exhibits spaced out (so that one's viewing is not distracted), and a broad range of artifacts from the very old to the very new. Surprisingly modern inside, it's also one of the very few air-conditioned museums in Florence, which is a plus if you visit during the summer months.

As many of the items that you see around the Duomo are actually copies, the originals are housed in this museum for safekeeping. The most astounding item is, perhaps, the time-machine-like recreation of the Duomo's ancient facade, displayed in original scale and well-supplied with many astounding fine details (the original huge gold door is particularly unforgettable).

Other original masterworks that once adorned the Duomo, such as its baptistry and bell tower, are presented in brightly illuminated displays with a good sequence where one can check each closely. Fortunately, a number of long benches were thoughtfully placed so that visitors can sit down and feast the eyes without becoming dizzy, as happens outside when trying to take it all it at once.

The whole museum can be easily covered in about two hours but, of course, art lovers may want to leave a little more room. Descriptions are in Italian and English so that you can be your own tour guide.

***MICHELANGELO'S MASTERPIECES***
Michelangelo's pietà displayed here ("The Deposition", also called "The Lamentation over the Dead Christ") is quite different from the pietà in St. Peter's in Rome but just as beautiful and very well presented in a simple room that helps to really focus on the art. The last sculpture that the master worked on (six days before his death) depicts Jesus' body being lowered from the cross into the arms of Mary his mother and Mary Magdalene by Nicodemus (whose face under the hood is considered to be a self-portrait). Never completed because Michelangelo carved it away until there was insufficient stone, the sculpture has an abstract quality, in keeping with 20th-century concepts.

Tip:
Don't forget to go up the rooftop terrace for a front-row seat to the Duomo!