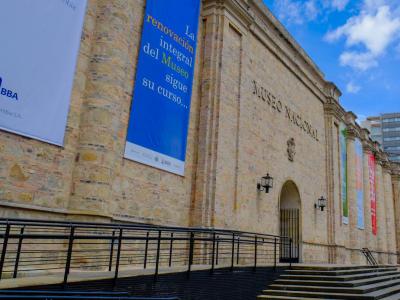 The National Museum of Colombia is a dependency of the Colombian Ministry of Culture. It is the oldest in the country and one of the oldest in the continent, built in 1823. Its fortress architecture is built in stone and brick. The plant includes arches, domes and columns forming a sort of Greek cross over which 104 prison cells are distributed, with solid wall façade. The building was first built in 1874 by Thomas Reed. It was known as the Panóptico (inspired on the Panopticon prison) and served as a prison till 1946. In 1948, the building was adapted for National Museum and restored in 1975.

The museum houses a collection of over 20,000 pieces including works of art and objects representing different national history periods. Permanent exhibitions present archeology and ethnography samples from Colombian artifacts dating 10,000 years BC, up to twentieth century indigenous and afro- Colombian art and culture. Founders and New Kingdom of Granada room houses Liberators and other Spanish iconography; the round room exhibits a series of oleos from Colombia painting history. Paintings by masters Débora Arango, Fernando Botero, Enrique Grau, Ignacio Gomez Jaramillo, Santiago Martinez Delgado, and Guillermo Wiedemann are part of the Permanent Collection.