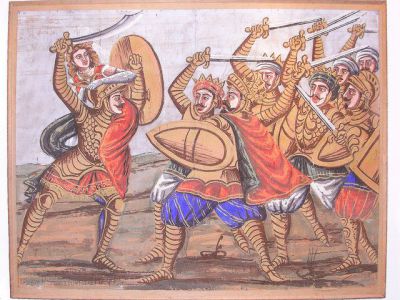 You will find the Museo Nazionale delle Arte e Traditionne Populari in the EUR district and you really should visit this large, fascinating museum, the only one of its kind in Italy. The early collection was exhibited in the 1911 Ethnographic Exhibition, held to celebrate the 50th anniversary of the Unification of Italy. After the exhibition the collection was housed in its present building which was incorporated into the EUR district in the late nineteen fifties, when the Italian authorities expanded Mussolini’s site intended for the 1942 World Fair into a vast business district outside the main part of Rome.

The museum is dedicated to the “other” side of Italian life: from the point of view of the people who made sure that food and wine arrived on the tables of the rich throughout the city. In the museum’s different sections you will find farm tools, traditional costumes, ceramics and other artefacts from all over Italy. There are fine examples of religious items, including some rather crude paintings of people suffering from various ailments and strange body-parts made from wax. These were made as offerings as thanks to the saints for deliverance from whatever ailment the object represented. The peasants had no money, so they offered whatever they could. The ground floor of the museum houses brightly painted carts that were used to freight goods from the country to market places, and even a gondola, offered to Queen Margaret of Savoy in 1882. Other highlights of the museum are the puppet theatre and the 12 masks of the Procession of San Sosti, the painted masks worn by the dancers during spring and autumn festivals. The 750 or so regional costumes are not only from Italy and its islands, but also from Greece, Albania, Austria, Germany, France, Spain and Northern Africa.
Operation hours: Tuesday - Sunday: 8:30 am - 7:30 pm
Image by hillman54 on Flickr under Creative Commons License.
Sight description based on wikipedia