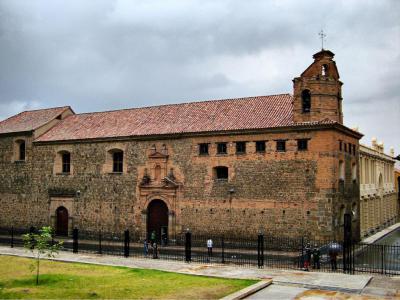 The home of the Poor Clares order in the Kingdom of New Granada was the church and convent of Santa Clara, built by the Spanish Architect Matias de Santiago. Work lasted from 1629 to 1647. During construction in 1630, twenty-four novices moved in.

Ultimately the church and convent were expropriated and became the Santa Clara Museum. The museum, operated by the Ministry of Culture, is located in the historical center of Bogota, at number 8-91 on Avenue 8. The imposing stone building and tower represent the 17th and 18th-century Baroque architecture of Bogota.

The Museum facade is a Romanesque styling of unadorned Spanish Baroque. The church has semicircular arches and one nave. There is a hexagonal tower on top with a short stubby spire. Inside, the ceiling is a barrel vault with a semicircular arch over the chancel. The interior has pilasters and niches on the walls.

The outside of the structure may be severe, but the inside is lavish. The ceiling vault is covered with golden flowers. The spaces in between are painted blue and yellow. Altarpieces on two walls, murals, oil paintings, and a latticework of stars completely cover the walls. Frescoes of the 17th century are of redwood and gold stars.

The presbytery holds paintings of archangels. The Crypt is under the main altar. The museum highlights the art of the original church and colonial religious art from both the Cuzco and Quito Schools. Temporary exhibits show 19th-century and modern artists. Modern works are found in many locations in the church.
Image Courtesy of Wikimedia and Martinduquea.