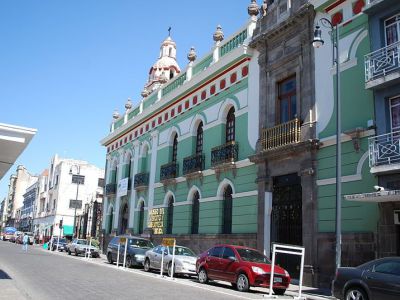 Museo y Biblioteca Pública Ignacio Zaragoza is an extraordinary facility dwelling within a 17th century building. It was subject to careful restoration in 1996, which preserved its historical and architectural value. In 1997, the museum was inaugurated, featuring quite a great number of priceless items that are today organized within 6 rooms, 5 of which tell the world about General’s Ignacio Zaragoza life and work. The exhibits feature amazing swords, machetes and various firearms; the national flag’s history is also revealed to all interested. The library welcomes enthusiastic visitors Tuesday to Friday between 10am and 8pm, Saturdays from 10am till 1pm and Sundays from 10am till 4pm.
Image by AlejandroLinaresGarcia on Wikimedia under Creative Commons License.