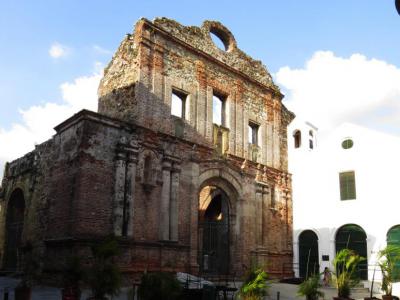 The Museum of Colonial Religious Art is housed in the restored Church and Convent of Santo Domingo that was built in 1673. The original structure was ravaged by fire in 1737 and 1756 along with much of Panama City.

Today, you can see a beautiful building with columns and bricks paired inlaid facades. The prominent, flat 15-meter long Arco Chato is a famous arch that used to form the choir base in the original building and is still in place. During the long debate in the US congress over the proposed location of the then nascent canal across the American continent, the Arco Chato is said to have tipped the scales in Panama’s favor since its survival was taken as the proof that that the area was not in an earthquake zone.

The museum collection includes colonial era religious artifacts dating back to the 16th century. If you have a penchant for museums or want to explore religious art, this would be a good place to visit.

Want to visit this sight? Check out these Self-Guided Walking Tours in Panama City. Alternatively, you can download the mobile app "GPSmyCity: Walks in 1K+ Cities" from iTunes App Store or Google Play. The app turns your mobile device to a personal tour guide and it works offline, so no data plan is needed when traveling abroad.

For centuries, colonial religious architecture has played an important role in the configuration of the urban layout of Panama City. By the 17th century, convents had an...  view more