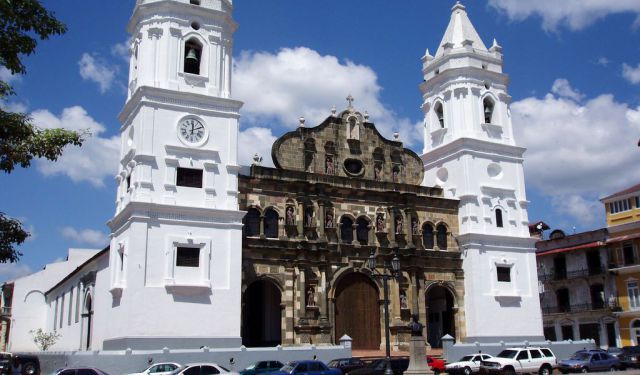 For centuries, colonial religious architecture has played an important role in the configuration of the urban layout of Panama City. By the 17th century, convents had an enormous presence in the center of the city, occupying the interior of the walled enclosures. The Historic District of Panama City was inscribed on the World Heritage List in 1997 for representing an exceptional example of 17th century colonial urban planning in the Americas.

Most of these religious buildings are of Catholic denomination and designated National Historic Monuments. Particularly noteworthy among them are the Church of Saint Francis of Assisi – originally built in the 17th century and almost destroyed during the fires of 1737 and 1756 – its current edifice dates from 1918, when it was almost completely renovated. The Metropolitan Cathedral of Panama – a heir to the Cathedral erected by Pope Adrian VI in the great house of the Cacique Cémaco in 1510. Iglesia San Jose (Church of San Jose) was built between 1671 and 1677, and is famous for its baroque altar surrounded by a legend that it was saved from pirates by the monks. Iglesia la Merced (Church of Merced) – its construction dates back to 1680 and is the only church in the Old Town that preserves the original facade from its first construction.

If you would like to explore these and other beautiful old churches of Panama City in more detail, take this self-guided walking tour.
Image Courtesy of Flickr and Jeff Dooley.
How it works: Download the app "GPSmyCity: Walks in 1K+ Cities" from iTunes App Store or Google Play to your mobile phone or tablet. The app turns your mobile device into a personal tour guide and its built-in GPS navigation functions guide you from one tour stop to next. The app works offline, so no data plan is needed when traveling abroad.

1) Church of Saint Francis of Assisi

Church of Saint Francis of Assisi is a Roman Catholic Church in the historic district of Casco Viejo. This church is very popular for its magnificent view, making it a very popular tourist spot in Panama City. The church is small compared to the other churches but you will be dazed by its splendor as it is one of the most beautiful local churches.

Located on the ground of Bolivar Park, the Church of Saint Francis of Assisi was repeatedly destroyed by fire in 1737 and 1756. It was fully rebuilt in 1998. The church lies across the street from the National Theater. Down the street, just a block away, is the residence of Panamanian President, the Herons' Palace.

The Church of Saint Francis of Assisi was built of a stout stone structure way back in the early 1700s. Indigenous artisans from the nearby town of San Francisco, supervised by Franciscan monks, helped to build the eight hardwood baroque altars. The elegant main altar consists of over 400 pieces of colorfully painted tropical cedar and is an impressive example of colonial art. All in all, this historical church is well worth a visit.

Image Courtesy of Wikimedia and Franco4444.
2

No trip to Panama City's Old Town is complete without visiting a beautiful historic edifice on Independence Square, that is Metropolitan Cathedral. The construction of the cathedral started in 1688 and took 108 years to complete, so the place was not officially consecrated until 1796. In the late 19th century, an earthquake destroyed pretty much all of the neighboring buildings, but the cathedral itself remarkably survived. Also surprisingly, for many years later it had remained deserted until a major renovation was undertaken in 2003.

The cathedral stands out for its contrasting color combination and the mix of architectural styles which in turn offers a glimpse of the fascinating history of the country. The stones used for the construction of the entrance wall were taken from the ruins of the city of Viejo. Grey in color, this wall is contrasted by the two tower-like structures on both sides of the entrance, which are white. These towers are layered with material called “mother of pearl”, brought from the Pearl Islands.

The cathedral is particularly spectacular at night when the whole structure is lit up.

Image Courtesy of Wikimedia and Jasmy.
3

One of the most magnificent places to visit in Panama City is the Church of San Jose, located at Avenida A, near Plaza Herrera, Casco Viejo. The main attraction of this church is the seventeenth century Baroque style Golden Altar, Altar de Oro. The altar was originally located in a temple by the similar name, San Jose. After the pirates had burned down the Old Panama city, the altar was relocated to the new place and entirely renovated in 1915. Carved in mahogany, the altar is covered in golden leaf.

When you go to the city of Casco Viejo, you must visit the Church of San Jose, to admire the magnificent golden altar.
Image Courtesy of Wikimedia and Bacalao9820.
4

If you are a history lover or want to visit some exquisite historic divine place, Church of Merced is the right place for you. The Church of Merced is a very old church which was constructed way back in 1680 and situated in Casco Antiguo, which is close to Cathedral Park within Panama City. The church is remarkable and its beautiful and intricate Baroque stonework was moved piece by piece from the original site in Panama Viejo which incidentally was the initial city center that the Spaniards had founded.

Although the chapel has undergone renovations recently, its ornate Baroque facade is a classic example of Baroque architecture that is only observed amongst the oldest buildings in Casco Viejo. The church’s Baroque façade squarely faces anyone walking from the North towards it on Avenida Central. Despite the small structure, the stones with which the church is built have an impressive and long history. The church is said to have a better exterior than the interior and that it is best photographed and viewed late in the afternoon. The afternoon sun’s rays provide a sparkling effect on the tiny chapels and the bell towers. This amazing sight makes every tourist’s trip worthwhile and mesmerizing.

A museum that houses documents of historic and religious value lies in close proximity to the church, which incidentally was the site for storing birth and baptism records in Panama City.
Image Courtesy of Wikimedia and Danelet.
5

In the center of the city of Panama is located the township of Santa Ana. The town gets its name from the Church of Santa Ana, a shrine dedicated to Santa Ana, who, according to Christian tradition, is the mother of Mary and the grandmother of Jesus. The Church of Santa Ana was initially a parish church. The Count of Santa Ana donated funds to build the church and it was consecrated in 1764. The church was very popular in its early days and attracted a community of humble people all around it. These were the people who were engaged in various trades and the town of Santa Ana grew in reputation as a transit point for many trade routes.

The church was destroyed by fire in the year 1854 and was completely renovated only in the twentieth century. In 1980, the Church of Santa Ana was declared a historic landmark of national importance. Surrounding the church is a park that also goes by the name of the church. The area surrounding the church is far from the main tourist attractions that are in the old part of the city. You can experience a bit of the traditional Panamanian lifestyle with folk festivals, dance and music in a gazebo that is also a national landmark.
Image Courtesy of Wikimedia and Mirna Chen.