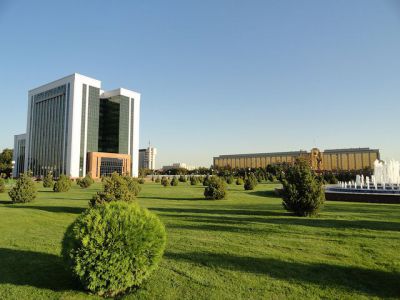 Independence Square (Uzbek: Mustaqillik Maydoni) is a central-most and largest square in Tashkent, a place where public celebrations, military parades and other special events take place. As a matter of fact, this is more like a huge park rather than a square, replete with trees and flower beds amid monuments and fountains, a showcase of modern Uzbekistan.

The history of this place goes back over a century, to 1865, when, following the capture of Turkestan by Russia, the new imperial administration began transforming Tashkent into a European-like city. The reconstruction involved, among other things, the building of residence for the Turkestan Governor-General, the so-called "White House".

The square in front of the house was named Cathedral Square, after the Spaso-Preobrazhensky Cathedral, located on the opposite side. In the early 1930s, under the Soviets, the cathedral was demolished and the square was renamed Red. In 1936, they had a Lenin monument placed here. Twenty years later, Red Square became known as Lenin Square.

After the devastating earthquake of 1966, a radical reconstruction of the square was carried out in compliance with the general plan of resurrection of Tashkent. In 1967, a modern "concrete-and-glass" edifice of the Council of Ministers of the Uzbek SSR, on the south side of the square, was completed. The entire reconstruction was finished in 1974, on the eve of the 50th anniversary of the Uzbek SSR. That same year, the old Lenin monument was moved to Samarkand, and its place was taken by a new, bigger monument to the same Vladimir Lenin, set on top of a marble plinth that was taller than a ten-storey building.

Following Uzbekistan's independence in 1991, Lenin Square was renamed Independence Square and the bronze statue of Lenin was dismantled. Its marble plinth, however, survived and was topped with a golden globe (featuring a map of Uzbekistan), known since as the Independence Monument. Later, in front of it, another statue, of a happy mother with a child, symbolizing Motherland, was added. Installed in 2006, it marked the completion of the total reconstruction of the area.

Another notable mark, at the square's entrance, is the silver Arch of Independence, with figures of storks around the fountain. Overlooking the square from the western side there are also a number of imposing administrative buildings, such as the Council of Ministers, the Senate of Uzbekistan, and the Ministry of Finance.
Image Courtesy of Flickr and Fabio Achilli.