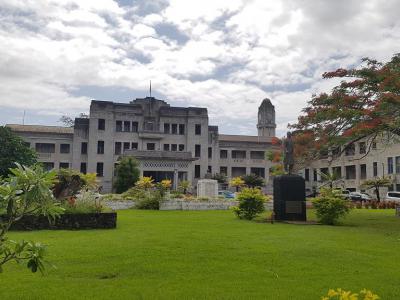 Occupying the site of Fiji’s first sugar mill, Naiqaqi is the name that was informally given to a large swath of land which begins at the Dophin Plaza (on Victoria Parade and Loftus Street) and extends southward to the present day iTaukei Land Trust Board, the Fiji Broadcasting Commission and the Government Buildings area.

Naiqai translates from the Fijian Language as “the mill,” but etymologically and colloquially, it has become known as “the crusher.”

If you’re a real history detective, keep your eyes peeled for a large gear on display near the corner of Carnarvon and Loftus Streets, behind FNPF Place. Local lore has it that the 5-foot diameter gear once belonged to the mill.

Growing cane to feed the mill was what initially brought settlers, many of them planters, to Suva.

The mill was built by Leicester Smith in 1873. Due to the shallow soil in the Suva area, the sugar venture was a failure. Eventually, the mill broke down and management did not honor its promise to buy the planters’ cane, so the mill was ultimately closed in late 1875.

Opposite the iTaukei Land Trust Board and Fiji Broadcasting Commission buildings, crossing Thurston Street, is the massive Government Building complex.

Until 1935, the area was a swamp, about 4 feet below present road level, with the mouth of a creek as its center and its bed in some places 60 feet lower than the surrounding areas. The swamp was filled with crushed soapstone, and although part of the creek was diverted to run alongside Albert Park, some water still flows through the loosely packed stones far below the buildings.

More than 3 miles of reinforced concrete piles, driven down to the creek bed, support the buildings. In 1937, the foundation stone was laid by Gov. Arthur Richards, and in 1939, the buildings were officially opened by Gov. Harry Luke.

The clock chimes, which divide the lives of Government Buildings office workers and nearby residents into 15 segments, from 6 a.m. to midnight, consist of five different tunes, all in the key of F major.

The new wing of Government Buildings was dedicated in 1967 by Gov. Derek Jakeway.
Image Courtesy of Nicholas Halter.