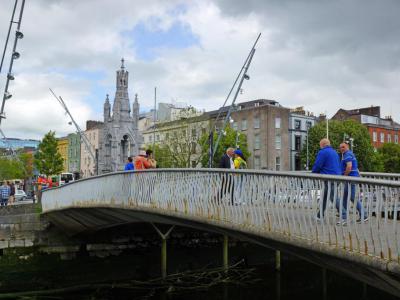 Built over the River Lee, the Nano Nagle Bridge connects the Grand Parade Street and Sullivan's Quay. The bridge was built as one of the many structures to mark the 800th anniversary of Cork being given the status of a city. Located in one of the city's most scenic parts, the bridge adds an artistic appeal to the area. This beautiful bridge took about 7 months to complete and like many other structures in Cork, the Nano Nagle Bridge too has a story that comes with it.

The Nano Nagle Bridge is named after Honora Nano Nagle, the founder of the 'Sisters of the Presentation of the Blessed Virgin Mary' (PBVM), in Ireland. Born in 1718, Honora was one of the greatest women in Ireland. Despite being born in a strict Protestant English era, the Nagle family stayed rooted in their Catholic faith. The English were so determined to wipe out the Irish Catholic Identity that education was only offered to those who would first convert to Protestantism. The English efforts to eradicate the Catholic faith led to a period of poverty, distress and misery in Ireland.

The family moved to France for Nagle’s education. On completing her education, Nagle returned to Ireland and dedicated her life to help and educate the poor. Having done a lot for the downtrodden and poor she is looked up at by the people all over the world.

Why You Should Visit:
Perfect as a scenic shortcut from O'Sullivan's Quay to Grand Parade.
You get a good view of St. Fin Barre's Cathedral up the river, too.

Tip:
The bridge will lead you to the Nano Nagle Centre set on a 32 acre certified organic farm.
There is a nice Farmers Market on site run by the nuns, open every second Saturday morning from 10:30am to 1pm.
Image by williamkiely12 on Flickr under Creative Commons License.