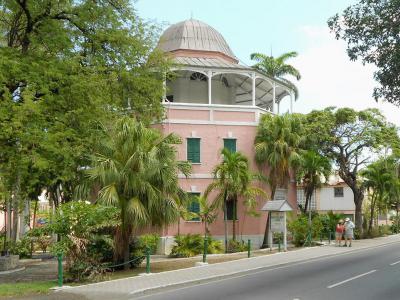 The Nassau Public Library and Museum is both the oldest and the largest library in the country. It was founded by the Bahamas Society for the Diffusion of Knowledge in 1837 as a reading society. The institution became an official library 10 years later.

The jail was converted into a library in 1873. The prison cells are now used to hold documents, newspapers, charts, books, historic prints and Arawak artifacts. It also has computers with internet access that can be rented for a minimum of 15 minutes at a time.

The Nassau Public Library and Museum is open Monday through Friday from 10 AM to 5:45 PM and Saturdays from 10 AM to 3:45 PM. It is closed on Sunday.
Image by Roger W on Flickr under Creative Commons License.

Want to visit this sight? Check out these Self-Guided Walking Tours in Nassau. Alternatively, you can download the mobile app "GPSmyCity: Walks in 1K+ Cities" from iTunes App Store or Google Play. The app turns your mobile device to a personal tour guide and it works offline, so no data plan is needed when traveling abroad.

Nassau is the capital of Bahamas and therefore offers several museums and art galleries for tourists to visit. The art work reflects the history, culture and the local way of life. As with many cities set on an island in the ocean, one of the most popular museums is the Pirates Museum. Nassau also provides a plethora of other outstanding museums such as the Pompey Museum of Slavery &...  view more

Nassau is the largest city and capital of The Islands of The Bahamas. Over 70% of Bahamian residents live in this bustling city. Nassau is the country’s government, education, administration, and media center.

Nassau was founded in 1670 by British nobility who sought to settle New Providence Island. The British named the settlement Charles Town and built a fort to defend the new town against...  view more