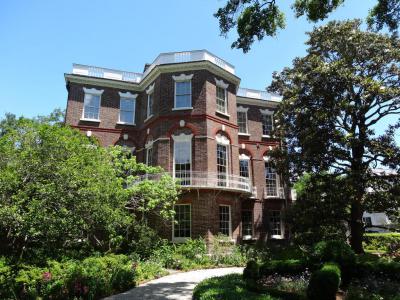 Nathaniel Russell, a wealthy shipping merchant from Rhode Island, built this magnificent three-story, Federal-style, 9,600-square-foot rectangular townhouse in 1808. Today, it is recognized as one of America's most important Neoclassical structures. It was designated a National Landmark in 1960 and added to the National Register of Historic Places in 1971.

The prestigious house was built to display Russell's prominence as one of the community's wealthiest citizens. Constructed of Carolina gray brick, the three-bay entrance front emphasizes height rather than width with the main living areas on the second and third levels. The first-story entrance front is dominated by the residence's grand entrance door.

There are three main rooms per floor, each of different geometric designs: a front rectangular room, a center oval room and a square room in the rear. The most important architectural feature is the elliptical "floating staircase", which ascends three floors and is showcased by a golden walled stair hall. The Adamesque ornamentation of the fireplaces' mantles and cornices are among the most detailed in the city.

The second-floor oval drawing room is the most highly decorated and is where the women of the house retired to after dinner. Papered in apricot, it features elaborate plaster moldings covered with 24-karat gold leaf. Though most of the art and furniture displayed inside is not original, it is of the correct period, with many items being of Charleston origin.

To the south is a formal English garden with gravel paths, boxwood hedges and plants favored in the 19th century, while in the rear is the two-story slave quarters that housed many of the 18 slaves that lived and worked here.

Why You Should Visit:
Arguably the 'grande dame' of house museums, with many intricate details to both see and learn about. You'll be able to stroll through the beautiful gardens and nearby old graveyard before or after your visit.

Tip:
Be sure to get there early, especially for weekend tours. Online tickets do not give a time, and the tours are filled onsite, on a first-come first-served basis. For an extra fee, you can also gain admission to the sister Aiken-Rhett House farther uptown.