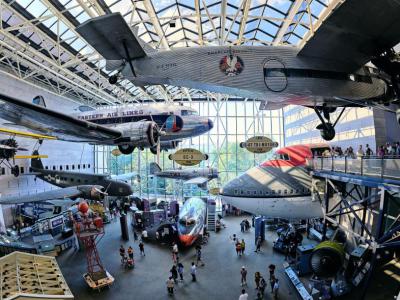 The National Air and Space Museum of the Smithsonian Institution is a must-see for all aviation and space aficionados. It houses the largest collection of planes and spacecraft in the world. This is one of the most popular of the Smithsonian museums, so plan to go early and spend a day.

The original inception of the museum began in 1946, although some of the pieces in the museum are from the 1876 Centennial Exposition. At that time the name was to be the National Air Museum. As man ventured to the heavens and landed on the moon, the name was changed to include “Space”. In fact, the exhibition hall was opened by Director Michael Collins who has been to space on the Apollo 11 mission to the moon.

The Spirit of St. Louis that Charles Lindbergh flew over the Atlantic is displayed here along with Wright Flyer that made its famous flight at Kitty Hawk in 1903 piloted by Orville Wright. The Apollo 11 Command module is here too. The Bell X-1, Mercury Friendship 7, and SpaceShipOne are also on display. More conventional aircraft include a DC-3 and a 747. Even the USS Enterprise from Star Trek fame is here.

Why You Should Visit:
Great for learning and teaching kids and adults about the science behind flying.
You learn about commercial or military jets, new technology and early technology.
The motion-based, VR, flight simulators are amazing and the Planetarium shows have awesome visual effects.

Tip:
They also have audio tours and guided tours – you can check the information counter for more info.