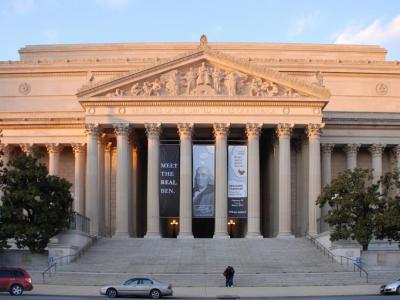 There are also public vaults that can be visited. These vaults hold over 1,000 records relating to the American democracy. Some of Abraham Lincoln’s telegrams that he sent to his generals are here, as well as handwritten notes by George Washington. There are an additional five vaults that take their names from the preamble to the Constitution and deal with law, citizenship, war, firsts and keeping records for future generations to take due note of.

The William G. McGowan Theater shows an informative film about the National Archives and another film on the Charters of Freedom. There are also various exhibits in the Lawrence F. O’Brian Gallery.

The National Archives and Records Administration is located at 700 Pennsylvania Avenue, NW, between 7th and 9th streets. The Rotunda entrance is on Constitution Avenue. Admission is free, however, a ticket can be reserved during the busy tourist season. The cost of ticket is nonrefundable. The entrance for those with tickets is the special events door on Constitution Ave.

Opening Hours:
Monday-Sunday: 10:00 am – 5:30 pm
Image by Jarek Tuszyński on Wikimedia under Creative Commons License.
Sight description based on wikipedia