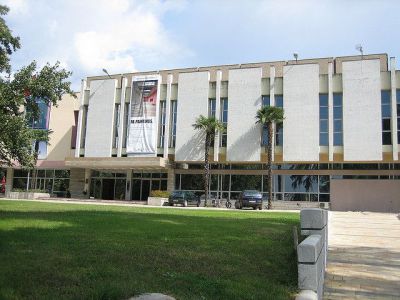 The National Art Gallery is an art museum that is run under the supervision of the Ministry of Culture. The museum, established in 1946, features over 5,000 works from famed Albanian artists and artists from abroad. The current venue opened in 1974 but is undergoing extensive renovation to be completed at the end of 2023.

The museum's permanent collection focuses on Albanian art and cultural matters. Its aim is to hold the most extensive and important documents and works of art that originated in Albania. It also strives to educate the public on matters of importance to Albanian history and culture.

The permanent collection focuses primarily on Socialist Realism Art. Examples of the socialist-era artwork found in the National Art Gallery include "The Bread Strike" by Skender Kamberi, " Voluntary work at the ‘Stalin’ textile factory" by Abdurrahmin Buza and "Portrait of a Worker" by Alush Shima.

The National Art Gallery is located on the Martyrs of the Nation Boulevard.