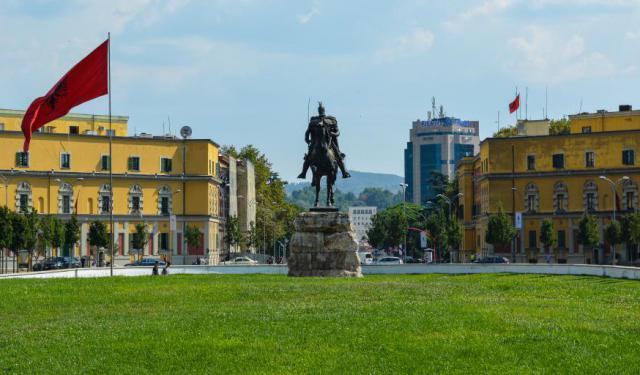 The Romans settled in the area that would become Tirana in the 3rd century. The Byzantine Emperor Justinian I built a castle that has some remnants left for tourists to see today. Tirana Castle, as it is now known, hosts restaurants and shopping areas. The most notable piece of history is arguably the wall, often referred to simply as Justinian's Wall, which is the most well-preserved portion of the castle.

Tirana has suffered through occupation by many outside forces over the years. The city managed to survive each occupying power only to become stronger and more culturally diverse. The National History Museum displays much of the history of Tirana along with artwork that largely focuses on works from famous Albanian artists.

The center of Tirana is home to Skanderbeg Square, which is notable for its proximity to a wide number of important and historical buildings. The Et'hem Bey Mosque is located near the square. The beautiful mosque offers daily tours and provides access to the Clock Tower of Tirana, a symbol of the city. Those visiting Skanderbeg Square should not skip viewing its namesake atop the equestrian statue. Skanderbeg Monument looks over Skanderbeg Square as an homage to the national hero of Albania.

The visitors wishing to shop in Tirana will enjoy a walk along Murat Toptani Road that leads to Tirana Castle. Along with shops and restaurants, a traditional bazaar is located in the castle where local artisans sell their crafts and introduce visitors to the unique art of Albania.

Take this self-guided walking tour to explore some of the most notable sights in Tirana, Albania.
Image Courtesy of Wikimedia and Chris Walts.
How it works: Download the app "GPSmyCity: Walks in 1K+ Cities" from iTunes App Store or Google Play to your mobile phone or tablet. The app turns your mobile device into a personal tour guide and its built-in GPS navigation functions guide you from one tour stop to next. The app works offline, so no data plan is needed when traveling abroad.

Skanderbeg Square, known in Albanian as Sheshi Skënderbej, is the primary square in Tirana. It was named after Gjergj Kastrioti Skenderbeu, a military leader who led a rebellion against the Ottoman Empire. Usually referred to as Skanderbeg, he referred to himself as the "Lord of Albania" and is considered a national hero.

The public square was originally built in 1917. It was primarily comprised of a fountain in the center of a square surrounded by the Old Bazaar, the Orthodox Cathedral and the City Hall. The main feature of the square is the Skanderbeg Monument, erected in honor of Skanderbeg.

Skanderbeg Square received the European Prize for Urban Public Space in 2018. It also received a prize from the European Union for Contemporary Architecture in 2019.

Image Courtesy of Wikimedia and Predrag_Bubalo.
2

The National History Museum was established in 1981. The museum contains over 5000 items in its permanent exhibits.

The museum includes eight pavilions that focus on different aspects of Albanian history. These include the pavilions of Antiquity, Middle Ages, Renaissance, Independence, Communist Terror and the National Liberation Antifascist War. There are also pavilions dedicated to Iconography and Mother Teresa.

The National History Museum considers the Pavilion of Antiquity to be its most important. Items on display date from the 4th century BCE and go through the early middle ages, ending in the 8th century. Most of the items on display are sculptures like the God Apollo and the head of Artemis. Other important exhibits in this pavilion include the findings of the Monumental Tomb of Lower Selca and the mosaic of the Beauty of Durres.

Those who wish to learn more about the modern history of Albania can find plenty of materials at this museum. The Pavilion of Independence focuses on the most important historical moments in Albania after the Declaration of Independence in 1912 through the start of World War II.

The pavilions of antifascist war and communist terror display relics from those who died in the War of Vlora. Visitors can read about the war, find documents that show the protection of the Jewish population during the Holocaust, watch a documentary and view photographs.

The Skanderbeg Monument is a statue of Albanian hero Gjergj Kastrioti Skënderbeu, often referred to as simply Skanderbeg. The statue stands in the main square of Tirana, also named in honor of this military commander. Skanderbeg

The bronze statue stands on a stone pedestal showing Skanderbeg on horseback. The 36-foot monument was designed by Odhise Paskali. It was installed at Skanderbeg Square in 1968 on the 500th anniversary of Skanderbeg's death.

The monument was erected in place of a statue of Joseph Stalin, facing the square and all of its cultural sites like the National Museum, the Clock Tower, Et'hem Bey Mosque and the Palace of Culture.

Behind the statue is a Park of Europe, a large, grassy area that is surrounded by a paved walkway and numerous shade trees. Surrounding Park of Europe are the government buildings of the square. These include the Tirana City Hall and numerous ministry buildings.
Image Courtesy of Wikimedia and Avi1111.
4

The Hajji Et'hem Bey Mosque, usually shortened to Et'hem Bey Mosque, is a mosque in the center of Tirana. Facing Skanderbeg Square, the mosque functions both as a religious building and a historical, cultural treasure to the city.

The mosque was built from 1791 through 1821. Construction began under Molla Bey of Petrela who died before the building was complete. Construction continued under Molla Bey's son, Haxhi Ethem Bey. At that time, it was part of a building complex that included the Sulejman Pasha Mosque, the Karapici Mosque and the Old Bazaar.

Some of the more unique features of Et'hem Bey Mosque are the frescoes located on the exterior of the building and in the portico. These frescoes have themes that are rarely found in Islamic art. Trees, waterfalls and bridges are featured within the ornate paintings, which are easily viewed on the mosque's northern wall.

It was closed during communist rule but reopened in 1991 shortly before communism fell in the country. Today, visitors may take enter the mosque for prayer service or they may take one of the daily tours.
Image Courtesy of Wikimedia and Predrag Bubalo.
5

The Clock Tower of Tirana, known in Albanian as Kulla e Sahatit, is a 115-foot tall clock tower built in 1822. The tower is located near Skanderbeg Square, between Lulishte Park and the Et'hem Bey Mosque. It offers a unique and beautiful vista of the city from its viewing platform.

Construction of the tower was completed in 1822 by Etehem Bey Mollaj in the Islamic style. It was the tallest building in Tirana at the time it was built. The clock was assembled by watchmaker Ismail Tufina. The Tufina family continued to oversee the clock through 1973 when the communist regime forcibly removed them.

The clock was severely damaged in 1916 during World War I. A new clock was not installed until 1928, which was also installed by the Tufina family. An additional construction and new roof were required in order to install this new, larger clock face. These upper floors were once again destroyed during World War II. The clock has been replaced twice since 1946. Today, it holds a Chinese clock that was added in 1970.

Renovations over the years have allowed the public to access the viewing platform by climbing a narrow case of 90 wooden stairs. Access to the Clock Tower of Tirana is free.
Image Courtesy of Wikimedia and Andrew Milligan sumo.
6

BunkArt 2 is located in a large bunker in the center of Tirana near Skanderbeg Square. This bunker was intended for the Ministry of Internal Affairs during the communist regime. The museum exhibits life in the Albanian military and the work of the communist police. There is a strong focus on prisoners and work camps.

The bunker was constructed between 1981 and 1986. It consists of 24 rooms and one apartment to be used by the minister of the interior. It also has a large meeting hall that is now used to display exhibits. The bunker was code-named "Pillar Object" through the end of communist rule.

Tourists are confronted by an audio recording when they enter BunkArt 2. This voiceover provides names of political prisoners who were victims of communist rule. The museum also has photographs and equipment that show the persecution of 100,000 Albanians under the communist regime.

BunkArt 2 offers three historical exhibits covering dates from 1913 to 1939, 1939 to 1944 and 1944 to 1991. There are also artistic installations throughout the bunker. Tourists will also see rooms dedicated to surveillance and investigation. Investigation could be conducted on anyone who was thought to be an enemy of the state; the type of room that was used for interrogation is part of the tour.

BunkArt 2 is open seven days per week from 9:30 AM to 8 PM.
Image Courtesy of Wikimedia and Rakoon.
7

Murat Toptani Road is a popular pedestrian street in Tirana. It is named for the Toptani family, the leading Albanian noble family while Albania was under Ottoman rule. The name is derived from a word meaning "cannon," as the Toptani family owned cannons at a time when few others did.

Many streets around central Tirana are named for the Toptani family. Murat Toptani Road is arguably the most famous due to its location and its walkability. The stone-paved street rests between the Parliament House and the National Art Gallery. It is also possible to see the city's old fort from the street. It is not far from the residence of the Albanian Royal Family.

Plenty of entertainment, dining and shopping options are available a few steps away from the cobbled Murat Toptani Road. The Toptani Shopping Mall, Fan Stilian Noli Park and the open-air art installation Reja, or The Cloud, are all worth visiting.
Image Courtesy of Wikimedia and Joergsam.
8

Tirana Castle is a 14th century castle that sits in the center of Tirana. It is also known as the Fortress of Justinian. The fortress has three towers along with numerous buildings that are open to the public. They currently contain hotels, restaurants and shopping.

A favorite among tourists is the traditional bazaar located inside Tirana Castle. This relatively new shopping area was created to resemble bazaars that would have been seen during the Byzantine era. Visitors can purchase traditional hand crafts or try local foods while they stroll around the ruins.

Tirana Castle was declared a first category monument of culture in 1973. The new tracks of preserved walls were declared cultural monuments in 2008.
Image Courtesy of Wikimedia and Pasztilla aka Attila Terbócs.