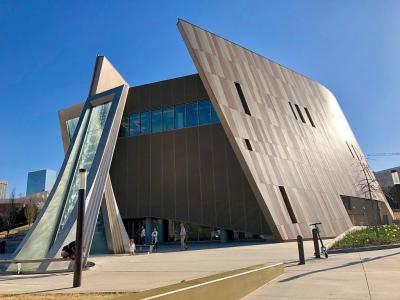 National Center for Civil and Human Rights, Atlanta (must see)

Opened to the public in 2014 and located in the same downtown plaza as the Georgia Aquarium and the World of Coca-Cola building, the Center for Civil and Human Rights boasts stunning architecture and highlights the central role the city of Atlanta has played in the (rather recent) civil and human rights movement.

The Center hosts a number of exhibitions, both permanent and temporary, that not only tell the history of the civil rights movement in the U.S., but how that period is related to more contemporary human rights struggles around the world. During the development phase, it was determined that the average visitor would be more familiar with events in Sudan or the Middle East than they would with others in e.g. Selma, Alabama, and that civil rights history alone would not be enough to sustain the facility. Currently contained are 3 permanent exhibitions which the average visitor can experience in ~75mins.

In early 2014, the New York Times named the Center as one of the biggest reasons to visit Atlanta, along with the then-soon-to-open Atlanta Streetcar and other new attractions. Do not leave the city without spending time here!