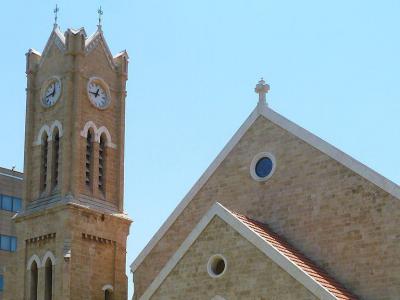 The National Evangelical Church of Beirut (NEC) is the first native Arabic Protestant congregation in the Middle East. Established in the Lebanese capital in 1848 by Congregational and Presbyterian American missionaries, the NEC is the oldest and the largest of nine congregations situated outside Beirut. In 1870, the first Evangelical Church was built to house the Arabic and English speaking congregations. During the next hundred years, the church was the center for all the activities and celebrations of both communities. Then, during the Lebanese Civil War (1975-1990), it was totally destroyed except for the bell tower and its congregation consequently dispersed. Since its reconstruction in 1998, the National Evangelical Church of Beirut is standing once again in the heart of Beirut's Central District, re-gathering its parishioners into its fold, with its prayer services presided over by Rev. Dr. Habib Badr, as well as with its many socio-cultural and educational activities.

This sight is featured in a self-guided walking tour of Beirut, Lebanon within the mobile app "GPSmyCity: Walks in 1K+ Cities" which can be downloaded from iTunes App Store or Google Play. Please download the app to your mobile phone or tablet for travel directions for visiting this sight. The app turns your mobile device to a personal tour guide and it works offline, so no data plan is needed when traveling abroad.