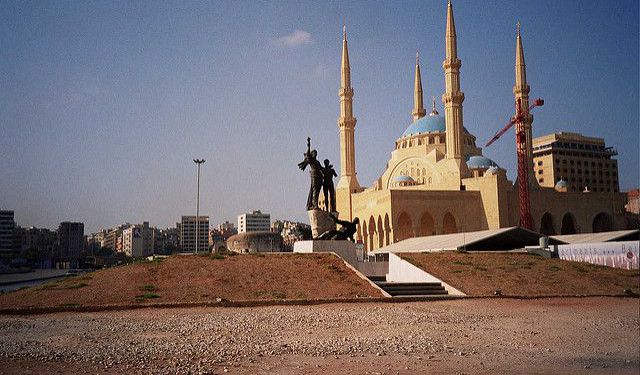 Beirut is a city with rich history going back more than five thousand years. The city’s architecture is a showcase of styles: Ottoman, Greek, Italianate, French, Mamluke Egyptian, Lebanese and more. After the destructive Civil War, Beirut has been gradually rebuilding itself, seeing many of the war-damaged buildings restored to their former state. Follow this orientation walk and discover the most popular, history-rich sights of Beirut!
Image Courtesy of Flickr and upyernoz.
How it works: Download the app "GPSmyCity: Walks in 1K+ Cities" from iTunes App Store or Google Play to your mobile phone or tablet. The app turns your mobile device into a personal tour guide and its built-in GPS navigation functions guide you from one tour stop to next. The app works offline, so no data plan is needed when traveling abroad.

Nejmeh Square Clock Tower is located in downtown Beirut. It is one the few historic structures that have survived the Civil War (1975-1990) without any damage. The "Rolex" clocks were integrated on the four sides of the Clock Tower. This place is a popular meeting point, equally loved by locals and tourists.
Image Courtesy of Wikimedia and Gregor Rom.
2

The Beirut Municipality building was erected in 1933, designed by Lebanese architect Youssef Aftimus. The building is a historic, as well as an architectural landmark. It houses the offices of the Beirut Municipal Council and is open to the public.
Image Courtesy of Wikimedia and Elie plus.
3

UFA Assurances Building was constructed in the early 20th century as the luxurious Semiramis Hotel. The green-dome building was made of yellow stone. It looks particularly beautiful at night when illuminated, much as many other buildings in Beirut.
Image Courtesy of BRUTIN Evi.
4

The ruins of medieval arches, said to belong to the palace of Emir Fakhreddine II, are located in the northern part of Martyrs’ Square in Beirut. They were discovered after the Civil War. The site is dated to 1600.
Image Courtesy of indalo.
5

Martyrs' Square is a square in the heart of downtown Beirut. Its central statue commemorates Lebanese nationalists who were hanged during World War I by the Ottomans.

In the 19th century, the square was known as Place des Canons. During World War I, Lebanon was under Ottoman rule. In 1915, Lebanon suffered from a food shortage due to Ottoman Turks confiscating food from the local population, swarms of locust invading the country, and western blockade by the Allies, intended to starve the Turks out. A revolt against the Turks broke out which resulted in hanging of many intellectuals and nationalists on 6 May 1916 in the renamed Martyrs' Square.

Some remains of the old Cinema Opera building (now a Virgin Megastore) and the bronze Martyrs statue are the only features left of the Martyrs' Square. The statue, which was inaugurated on March 6, 1960, is the work of Italian sculptor Renato Marino Mazzacurati.

Image Courtesy of Wikimedia and Vyacheslav Argenberg.
Sight description based on Wikipedia.
6

Saifi Village - commonly referred to as Le Quartier des Arts, due to its numerous art galleries, antique stores, artisan shops, and specialty boutiques - is an upscale, residential neighborhood in Beirut. Saifi Village is located at the southeastern periphery of centre ville. The village is bordered by Rue Charles Debbas to the south, Rue George Haddad to the east, Rue Gouraud to the north, and Rue Ariss & Kanaani to the west. The neighborhood was completely destroyed during the war. However, Solidere has rebuilt the neighborhood and restored its historic, French-colonial buildings and winding cobblestoned streets. The buildings are painted in various pastel colors. Saifi Village is a perfect example of a New Urbanist-style neighborhood with apartment buildings, town houses, and shops.
Image Courtesy of Wikimedia and Linaduliban.
Sight description based on Wikipedia.
7

The Mohammad Al-Amin Mosque is a Sunni mosque located in Martyrs' Square in downtown Beirut. It was built between 2002 and 2007 by late Lebanese Prime Minister Rafik Hariri, who is buried in its cemetery. It was inaugurated by his son Saad Hariri on October 17, 2008. According to architect, Azmi Fakhuri, the blue-domed mosque is of Ottoman inspiration, copying the Sultan Ahmed Mosque in Istanbul. Beirut is the most religiously diverse city of Lebanon and in all of the Middle East, with Christians and Muslims both having a significant presence.
Image Courtesy of Wikimedia and Bdx.
Sight description based on Wikipedia.
8

Roman Cardo Maximus, the five Roman columns - remnants of a Roman market in Beirut - were discovered in 1963, next to the Maronite Cathedral of Saint George in downtown area. The columns are dated to the second century AD.
Image Courtesy of Flickr and Uncle Monster.
9

The Parliament of Lebanon is the national parliament. There are 128 members elected to a four-year terms in multi-member constituencies, apportioned among Lebanon's diverse Christian and Muslim denominations. Its major functions are to elect the President of the republic, to approve the government (although appointed by the President, the Prime Minister, along with the Cabinet, must retain the confidence of a majority in the Parliament), and to approve laws and expenditure.

The Parliament building, was built in 1933 according to Armenian architect Mardiros Altounian's designs who was a Beaux-Arts architect. The building has an imposing symmetrical structure with an oriental revivalist style articulating historical regional references with neo-Mamluk overtones.

Image Courtesy of Wikimedia and Heretiq.
Sight description based on Wikipedia.
10

The Roman Bath Ruins were discovered in 1968-1969 in downtown Beirut right beside the Council for Development and Reconstruction. Later on, in 1995-1997, there was a thorough cleaning and excavation work taking place. The site features the remains of the brick vaults and columns that supported the floor, allowing hot air to circulate; these are surrounded by terraces with many benches. Various events and open-air concerts are often held here.
Image Courtesy of Wikimedia and A.K.Khalifeh.
11

The Grand Serail, also known as the Government Palace, is the headquarters of the Prime Minister of Lebanon. The Grand Serail is a historic building, the most important of three Ottoman monuments on the Serail hill. The other two are the Council for Development and Reconstruction and the Hamidiyyeh clock tower. This historic building has earned its importance through successive roles which it held since 1832.

Today, the Grand Serail is a blend of heritage architecture with a modern interior and high-tech amenities. A faithful adaptation of the original Ottoman structure resulted in a larger, more functional building.

The Serail covers 39,700 sq. m of floor space. The Grand Serail's four wings are disposed around a large courtyard which flanked at the center by a limestone and Carrera marble fountain. Both the exterior and interior facades are covered by a total of 588 arches and arcades. The two upper floors comprise the Prime Minister's residence and office, offices for his staff, as well as the cabinet room and ministers' offices. The ground floor consists of a banquet hall, two receptions areas, a press room and a courtyard. Finally, an underground level includes a car-park, offices and rooms for the personnel.
Image Courtesy of Wikimedia and Pjposullivan1.
Sight description based on Wikipedia.
12

In 1897, a clock tower was built near the Grand Serail to celebrate the 10th anniversary of Sultan Abdul Hamid II's coronation and to make up for the absence of a public clock indicating mandatory Muslim prayer times, especially when many foreign institutions had built western-style clock towers. The construction of the clock tower was approved by the Sultan following a letter of supplication from Beirut's governor Rashid Bey. The ceremonial laying of the first stone took place on January 9th 1897 (the birthday of the Sultan) in the presence of high officials, military representatives and members of the municipality of Beirut. The Hamidiyyeh Clock Tower was designed by Youssef Aftimus. It was destroyed during the Civil War and was restored in 1994 to its original condition - built of Beiruti sandstone, Jounieh limestone, Damascene Basalt and Deir el Qamar red stone. The Clock Tower stands 25 meters (82 ft) tall.
Image Courtesy of Flickr and François MUNIER.
Sight description based on Wikipedia.
13

The Gibran Khalil Gibran Garden is a 6,000-square-meter public garden in the Centre Ville area of Beirut, facing the UN Economic and Social Commission for Western Asia. The garden, which is named in honor of the Lebanese–American poet and philosopher Khalil Gibran, features two circular lawns, a fountain, and some modern sculptures, including the bust of Gibran himself. The garden is often used as a venue for peaceful demonstrations and sit-ins.
Image Courtesy of Flickr and rabiem22.
Sight description based on Wikipedia.
14

It is supported by the Armenian Evangelical community, and was established primarily to meet the needs of the large Lebanese-Armenian population. However, the university is open to all students, regardless of race, nationality, or creed, and has educated men and women from all sections of Lebanese society.
Image Courtesy of Wikimedia and Grigory Gusev.
Sight description based on Wikipedia.
15

Hamra Street, is one of Beirut's major commercial districts, and is filled with Lebanon's top fashion stores, as well as many restaurants, cafes, and hotels. There is are also a sizable number of bars and pubs, providing the area with a lively nightlife.
Image Courtesy of Flickr and Lolinka.
Sight description based on Wikipedia.