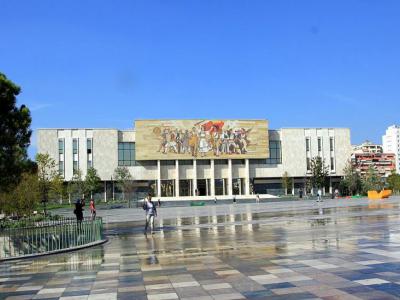 The National History Museum was established in 1981. The museum contains over 5000 items in its permanent exhibits.

The museum includes eight pavilions that focus on different aspects of Albanian history. These include the pavilions of Antiquity, Middle Ages, Renaissance, Independence, Communist Terror and the National Liberation Antifascist War. There are also pavilions dedicated to Iconography and Mother Teresa.

The National History Museum considers the Pavilion of Antiquity to be its most important. Items on display date from the 4th century BCE and go through the early middle ages, ending in the 8th century. Most of the items on display are sculptures like the God Apollo and the head of Artemis. Other important exhibits in this pavilion include the findings of the Monumental Tomb of Lower Selca and the mosaic of the Beauty of Durres.

Those who wish to learn more about the modern history of Albania can find plenty of materials at this museum. The Pavilion of Independence focuses on the most important historical moments in Albania after the Declaration of Independence in 1912 through the start of World War II.

The pavilions of antifascist war and communist terror display relics from those who died in the War of Vlora. Visitors can read about the war, find documents that show the protection of the Jewish population during the Holocaust, watch a documentary and view photographs.