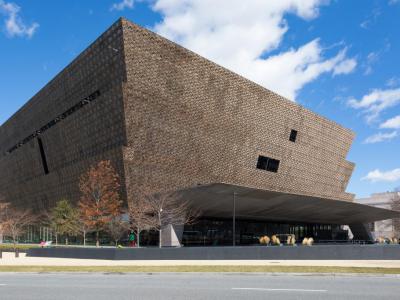 The National Museum of African American History and Culture (NMAAHC) is a Smithsonian Institution museum located on the National Mall in Washington, D.C. The museum was established in December 2003 and it is dedicated to featuring African-American history and culture.

The museum has more than 40,000 objects in its collection with about 3,500 items being on display to the public. The notable items in the collection include:

- Ashley's Sack, a mid-1800s hand-embroidered feedsack gifted from a slave mother, Rose, to her nine-year-old daughter, Ashley, when Ashley was sold away.
- A badge from 1850, worn by an African American in Charleston, South Carolina, indicating the wearer was a slave.
- Feet and wrist manacles from the American Deep South used prior to 1860.
- Garments worn by African-American slaves.
- An 1874 home from Poolesville, Maryland. The dwelling was constructed by the Jones family, who were freed slaves. The Joneses later founded an all-black community nearby.
- A segregated drinking fountain from the Jim Crow era with the sign "colored" (indicating it was for use by blacks only).
- Muhammad Ali's boxing gloves. Boxing headgear worn by Cassius Clay (later to be known as Muhammad Ali).