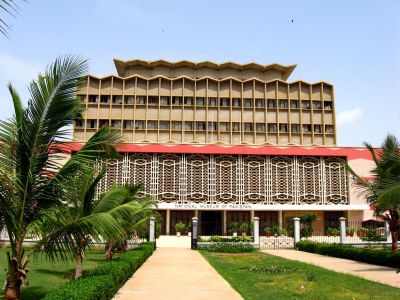 The Museum was shifted to the present premises in 1970. The basic objective of establishing National Museum was to collect, preserve, study, and exhibit the records of the cultural history of Pakistan and to promote a learned insight into the personality of its people. The Museum has a collection of 58,000 old coins (some dating from 74 Al-Hijra), and hundreds of well preserved sculptures. Some 70,000 publications, books and other reading material of the Archeology and Museums Department were also shifted to the National Museum so that general public could see them. Every year National Museum holds around a dozen exhibitions on National Days and other occasions.
Image Courtesy of Wikimedia and Shahid Siddiqi.
Sight description based on Wikipedia.

Want to visit this sight? Check out these Self-Guided Walking Tours in Karachi. Alternatively, you can download the mobile app "GPSmyCity: Walks in 1K+ Cities" from iTunes App Store or Google Play. The app turns your mobile device to a personal tour guide and it works offline, so no data plan is needed when traveling abroad.