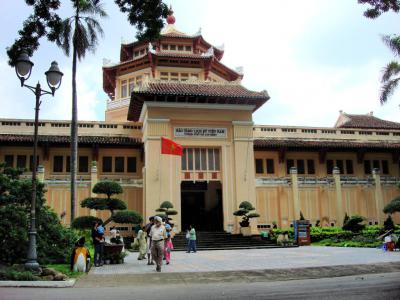 The National Museum of Vietnamese History, located in the Hoan Kiem district of Hanoi is an exhaustive repository of objects from the different civilizations that flourished in Vietnam.

The National Museum of Vietnamese History was established by the French colonial rulers as the Far East Research Institute. The museum formed part of the institute at the time. The building was designed by French architect, Ernest Hebrard, and is considered one of the finest examples of Indochinese architecture. It combines French colonial and traditional Vietnamese styles. The structure, completed in 1932, is so designed that the interiors are protected from the sun yet plenty of fresh air is let in conforming to modern day eco friendly architectural norms.

Historical treasures among exhibits featured at the museum include drums from the Bronze Age Dong Son civilization. The Dong Son civilization flourished near present day Hanoi and was known for its advanced metal casting expertise. The Champa civilization extended from Central to South Vietnam and their religious stone carvings are preserved in the building and as outdoor sculptures. Exhibits, including costumes and objects from the many subsequent royal dynasties that ruled Vietnam, are showcased at the museum.

By hiring a guide, visitors can get a better insight into the glorious history of Vietnam reflected in the exhibits displayed at the museum.