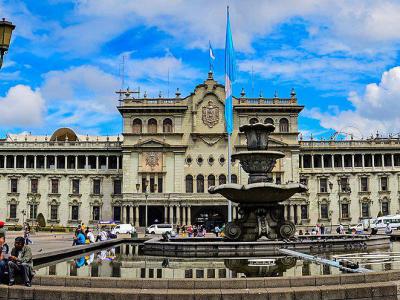 The symbol of Guatemala and a fine architectural gem, Palacio National de la Cultual or National Palace of Culture is an ornate landmark building crowning Parque Central. Construction of the Palace was completed in 1943 under orders from president General Ubico, and it was to function as presidential headquarters. The Palace is also known to be a ‘Zero Kilometer’, a point from which all the country’s roads start. The Palace has over three hundred rooms, with many open to the public. The mixture of architectural designs includes Moorish courtyards, carved stone frescoes, window arches and ornate columns.
Image by Rob Mercatante on Wikimedia under Creative Commons License.