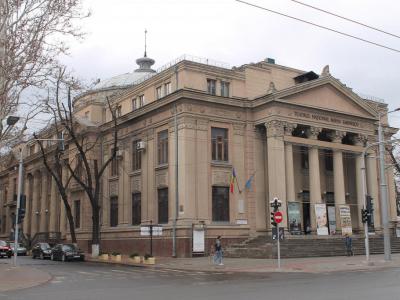 The National Theater Mihai Eminescu was established on October 10, 1920 by a group of prominent Romanian cultural and public figures, led by the Minister of Bessarabia in the Government of Romania, Sergiu T. Niţă. The troupe worked only one season, delivering 25 performances. In 1935, by ministerial order, theaters in Chisinau, Craiova and Chernivtsi were closed for financial reasons. Although short-lived, the first National Theater in Chisinau has made an important contribution to the culture of Bessarabia.

In 1933, the Moldavian National Theater was founded in the capital of the Moldavian Autonomous Soviet Socialist Republic, Tiraspol. After June 28, 1940, when the territory between the Prut and the Dniester rivers was incorporated into the Soviet Union, on the basis of the Tiraspol theater a new Moldavian State Theater was formed in Chisinau [then Kishinev]. In 1945, it was named after Alexander Pushkin. Shortly afterward, the majority of the Tiraspol troupe moved to Chisinau to join the local artists. The present building was constructed in 1954 and is now counted among the most treasured architectural monuments in the city. Designed by renowned architect Galadjeva, it boasts a grand neoclassic façade, which gives it a timeless appeal. The interior - credited to architects V.F. Alexandrov and V.P. Smirnov - is regal, elegant and opulent. With the walls painted with mural depicting ‘Hora’, and the balconies and lodges having ornate and delicate decoration, the interior of the theater is nothing short of splendour.

In 1994, the theater got the status of national and was renamed Mihai Eminescu. A new page in its history has been opened by talented young actors - students of renowned theater schools in Moscow, Tbilisi, Iasi and Chisinau.
Image by Harold on Wikimedia under Creative Commons License.

Want to visit this sight? Check out these Self-Guided Walking Tours in Chisinau. Alternatively, you can download the mobile app "GPSmyCity: Walks in 1K+ Cities" from iTunes App Store or Google Play. The app turns your mobile device to a personal tour guide and it works offline, so no data plan is needed when traveling abroad.

Although the history of Chisinau accounts for just over 500 years, whilst that of Moldova, as a nation, even less than that – since 1991, Moldovan culture and language are deeply rooted in the ancient Roman tradition. Just as the Eternal City, Chisinau rests on seven hills – in the valley of the River Bic, and has a replica statue of the Capitoline Wolf in the downtown area. Whereas most of...  view more

Stefan cel Mare Boulevard is one of the most prominent streets of the Moldovan capital. The 3.8-km thoroughfare is lined with numerous buildings of social and political importance, cultural institutions and shops.

Historically, it is believed to have stemmed from the road that led into the city from the Russian military camp stationed to the west of Chisinau in 1789. Long before the city plan...  view more

Given the lack of stunning scenery – no turquoise waters or snow-clad mountains – Moldova is a country not overrun by tourists. Still, those who come here, usually do so to taste the local wines and brandies – Moldova is a seasoned grape and spirit producer. The locals are very lovable and hospitable people, genuinely ready to delight strangers with their internationally-renowned booze. Here...  view more

Chisinau is the capital of Moldova, a small nation in Eastern Europe landlocked between Romania and Ukraine. For many years this land was part of the Russian Empire, and then the Soviet Union, until it finally reached independence in 1991. For this reason the city's name is often pronounced as Kishinev, which is a modified Russian version.

While the true origin of the name is unclear, many...  view more

Talented people are often able to leave their mark in the hearts of the posterity long after they are gone. Centuries fly but the power of the beauty persists, especially if set in the stones of the buildings designed by distinguished architects. Moldova's capital is blessed in this respect as the place associated with Alexander Bernardazzi, a Russian architect of Swiss-Italian descent who...  view more