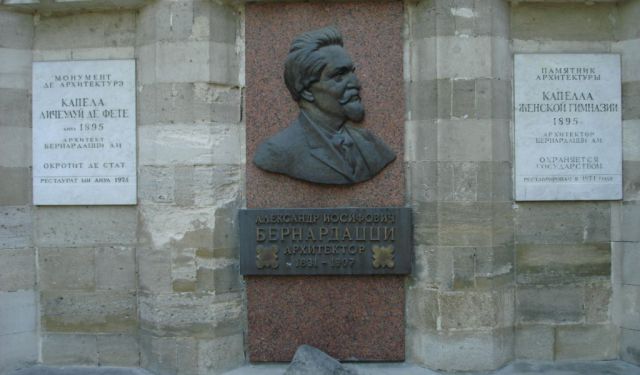 Talented people are often able to leave their mark in the hearts of the posterity long after they are gone. Centuries fly but the power of the beauty persists, especially if set in the stones of the buildings designed by distinguished architects. Moldova's capital is blessed in this respect as the place associated with Alexander Bernardazzi, a Russian architect of Swiss-Italian descent who served as the chief architect of Chisinau from 1856 to 1878.

His work marked the dawn of a new architectural era in the city and largely transfigured its appearance. During his time in Moldova Bernardazzi designed a total of 50 buildings, a good number of which, sadly, were destroyed during World War II. But those which have survived, continue to this day to fill the hearts of the onlookers with admiration and gratitude. Here are just some of them:

The City Hall (formerly the City Duma) – originally constructed in 1901, rebuilt in 1945–1948; home to Chisinau's municipal administration since 1951.

The regional courthouse – presently known as the Railway Administration Building; dated from the 1880s.

St. Teodora de la Sihla Church – otherwise known as the chapel of the no. 2 gymnasium for girls, built in 1895.

The Water Tower – currently home to the Historical Museum of Chisinau.

Bernardazzi's love of Chisinau extended into the afterlife as he stated in his will the wish to be buried here.

This self-guided walking tour offers a unique opportunity to visit some of the beautiful creations of Alexander Bernardazzi in Chisinau still in place – a stone symphony bequeathed to the locals and guests of the city!
Image Courtesy of Wikimedia and Zserghei.
How it works: Download the app "GPSmyCity: Walks in 1K+ Cities" from iTunes App Store or Google Play to your mobile phone or tablet. The app turns your mobile device into a personal tour guide and its built-in GPS navigation functions guide you from one tour stop to next. The app works offline, so no data plan is needed when traveling abroad.

Undoubtedly one of the few old buildings in Chisinau that are fit to captivate the eye of any beholder is the City Hall. An architectural landmark in its own right, this building stands majestically on the corner of Stefan cel Mare Boulevard and Vlaicu Parcalab Street.

The two-story edifice was built in the early 20th century to a design by Alexander Bernardazzi, featuring classic Gothic Italian style. A commemorative plaque to the architect can be found on the front wall.

The building has a quad-shaped plan with arched windows on elegant façade, ornately crowned by triangular pediments. The walls, draped in a faint shade of beige and white, are marvelously complemented by an elegant clock tower at the top.

Built in the 1880s for the District Court of Justice, this building is quite eclectic in style and bears a touch of French influence. At some point, the edifice was extended and somewhat "sobered up" stylistically in order to accommodate the regional Railway Administration office. There are two memorial plaques placed on the façade — one for the architect Alexander Bernardazzi, and the other one for the revolutionary commander Gregory Kotovsky (notorious gang leader before the Socialist Revolution of 1917) who was tried here for robbery in the early 20th century.
Image Courtesy of Wikimedia and D-Stanley.
3

Chisinau is a city that boasts a wide range of architectural styles. One of the local buildings, renowned for its architectural value, - the St. Pantelemon Church - will definitely grab your attention. Displaying a distinct Greek style, the St. Pantelemon Church is a valued monument in Chisinau. In fact, this is one of the very few buildings in the country to reveal such a strong Greek influence.

For the first few years of its existence this tiny church was largely regarded as one of the best samples of such fine Greek architecture in the whole of the Russian Empire. Built in the late 19th century, its chief patron is Saint Pantelemon, the saint who, according to a legend, was a martyr of the Diocletian persecution of Christians in 303 AD.

Designed by architect Alexander Bernardazzi, the church features a magnificent Medieval Greek façade with elegant tall windows, divided into three arches separated by stone mullions, and an octagonal dome that dominates the building, giving it an authentic Greek look. Painted in grey with shades of white and decorated with brick, this church distinctly stands out from the plain urban setting. The church's interior is just as captivating as its outer part.
Image Courtesy of Wikimedia and Baptiste Dauphin.
4

One site that is invariably present on the list of every visitor to Chisinau is the National Museum of Fine Arts – not just because of it being the home of some of the best works of art in the region, but also because it stands as a remarkable architectural monument.

Built in the mid 19th century by famous Russian architect Alexander Bernardazzi, this historic structure, unlike many others in Chisinau, has successfully survived a number of natural and human attempts to destroy it. This is partially the reason why it remains one of the most treasured local monuments and a source of many tales from the past. Over the years it has housed a school, gymnasium, hospital and warehouse, prior to becoming the home of fine arts collections.

The museum was founded in 1939 by famous local sculptor, Alexandru Plămădeală, in partnership with Auguste Baillayre, the French painter who later became the first director of the museum. It is said that Alexandru Plămădeală personally selected 160 works of Bessarabian and Romanian artists to set up the museum's first gallery. Apart from viewing the collection itself, visitors to the museum can learn about many of its lost treasures – a rather exciting story.

Why You Should Visit:
A nicely refurbished museum, very suitable for art exhibitions. The current collection has a good selection of old and very modern paintings/sculptures. You can see that the staff makes efforts to present the permanent collection properly and also to organize interesting temporary exhibits.

Tip:
The museum can be visited in about an hour and a half, including temporary exhibitions.

Located in the heart of Chisinau, the St. Teodora de la Sihla Church is an Eastern Orthodox temple. Founded by Teodor Krupensky and Eufrosinia Veazemsky, the church was built in 1895 by architect Alexander Bernardazzi. The building features Byzantine style, which today many regard as an architectural masterpiece.

The design was inspired by Russian and Ottoman architectural styles, and carries signature Bernardazzi elements. Initially purposed as a chapel for the girls' gymnasium, the project involved considerable compromises in terms of space and structure. The latter must not disturb any of the nearby buildings and incorporate a high basement which was to be connected to the gymnasium itself. The concessions given to the nearby buildings are largely responsible for the church's unique look. Its façade was a new word in church construction and the slender towers with high pyramids gave the building a mosque-like appearance.

Later-time remodeling afforded the church a small yard next to the main entrance. Unforeseen circumstances had delayed the consecration of this beautiful church by long 27 years. Today, it functions as the Cathedral of the Metropolis of Bessarabia and is an interesting place to explore, at least from an architectural standpoint.
Image Courtesy of Wikimedia and Harold.
6

The skyline of Chisinau is a blend of contemporary urban and historic architecture. Historic monuments scattered across the city, make Chisinau an ideal place for a day long trek with brief intervals for sightseeing.

One such sight to behold is the Water Tower, located on Bănulescu-Bodoni Street, near the Moldova State University campus. This historic and architectural landmark was built at the end of the 19th century by Alexander Bernardazzi, and formed essential part of the local water supply system. The purely utilitarian designation of this building did not dampen creativity that went into its design.

Divided into two segments, the upper portion of the tower was initially built in wood but destroyed by the earthquake that struck the city in the beginning of the 20th century. The tower was thoroughly rebuilt between 1980 and 1983, using local rock and brick. Nowadays, the renewed building hosts the Historical Museum of Chisinau.
Image Courtesy of Flickr and David Stanley.
7

7) Stephen the Great Park (must see)

Stefan cel Mare Park in Chisinau is undoubtedly the right place for those keen on a quiet stroll in the oasis of greenery amid the busy city. Spread over 17 acres of land, this park finds itself wedged between the Government House in the east and the House of Parliament in the west, and is bounded by Stefan cel Mare Boulevard and August 31st Street.

Oldest in town, the park was established in 1818 by the Russian Army Engineer Corps, and was later remodeled into its current shape by architect Alexander Bernardazzi. For many years the park was known as Pushkin Park, named after the great Russian poet, Alexander Pushkin, who spent several years in exile in Chisinau in the 1820s. The bust of Pushkin still marks the center of the park – it was created through public subscription by the well-known Russian sculptor, Alexander Mikhailovich Opekushin, in 1885. As the matter of fact, Chisinau was the second city in the whole of the Russian Empire, after Moscow, to have a statue commemorating the poet.

Nearby, within the park, is the Alley of Classics of Moldovan Literature. Opened in 1958, this Alley features monuments to the key Moldovan authors such as Mihai Eminescu, Grigore Vieru and others.

Presently, the park is also jokingly referred to as the “lovers' park” for being one of the most popular hangouts of the young people who come here regularly to meet, chat and spend time kindling their relationship.
Image Courtesy of Flickr and inga.

Although the history of Chisinau accounts for just over 500 years, whilst that of Moldova, as a nation, even less than that – since 1991, Moldovan culture and language are deeply rooted in the ancient Roman tradition. Just as the Eternal City, Chisinau rests on seven hills – in the valley of the River Bic, and has a replica statue of the Capitoline Wolf in the downtown area. Whereas most of...  view more

Chisinau is the capital of Moldova, a small nation in Eastern Europe landlocked between Romania and Ukraine. For many years this land had been part of the Russian Empire and then the Soviet Union, until it finally gained independence in 1991. For this reason the city is also often referred to as Kishinev, which is the Russian version of the name.

While the true origin of the name is unclear,...  view more

Given the lack of stunning scenery – no turquoise waters or snow-clad mountains – Moldova is a country not overrun by tourists. Still, those who come here, usually do so to taste the local wines and brandies – Moldova is a seasoned grape and spirit producer. The locals are very lovable and hospitable people, genuinely ready to delight strangers with their internationally-renowned booze. Here...  view more

Stefan cel Mare Boulevard is one of the most prominent streets of the Moldovan capital. The 3.8-km thoroughfare is lined with numerous buildings of social and political importance, cultural institutions and shops.

Historically, it is believed to have stemmed from the road that led into the city from the Russian military camp stationed to the west of Chisinau in 1789. Long before the city plan...  view more