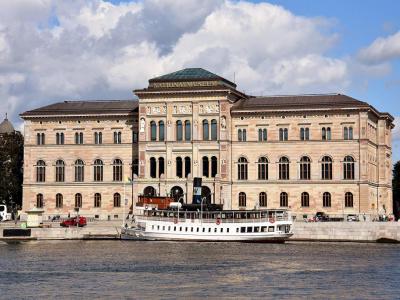 Nationalmuseum (The National Museum of Fine Arts) is housed in a building constructed between 1844 and 1866, inspired by the North Italian Renaissance architecture. Its designer was German architect, Friedrich August Stüler, who also authored the Neues Museum in Berlin. The relatively closed exterior, save for the central entrance, gives no hint of the spacious interior dominated by the huge flight of stairs leading up to the topmost galleries.

Upon its foundation in 1792, the museum was called Kungliga Museet (Royal Museum). Among its benefactors have been King Gustav III and Carl Gustaf Tessin.

The building was enlarged in 1961 to accommodate on-site workshops. The restaurant was added in 1996. For five years, between 2013 and 13 October 2018, the museum had been closed for renovation. The $132-million overhaul sought to put more of its collection on display added with the enhanced security, accessibility, fire safety and climate control befitting a modern institution.

Today, the museum exhibits comprise almost half a million drawings from the Middle Ages to the 1900s, a prominent 17th-century collection of Rembrandt and other Dutch painters, as well as collections of porcelain, sculptures, and modern art. The museum also has an art library which is open to the public.
Image Courtesy of Wikimedia and Bahnfrend.
Sight description based on Wikipedia.