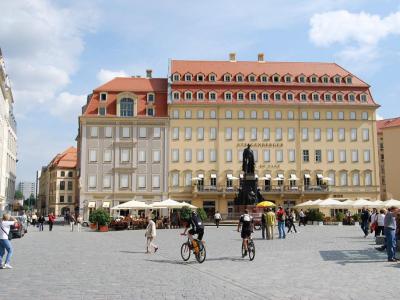 The Neumarkt Square in Dresden is an important historical and cultural location in the City. It is at this location where the first settlement that later became the city of Dresden was established. Reduced to rubble during the 1945 bombings, the square is being extensively renovated to restore Neumarkt to its former glory.

In the middle ages, the Neumarkt square did not form part of Dresden. The site was the graveyard of a Gothic church. During the renaissance, the capital of Saxony began to expand and Neumarkt Square was brought into the city in 1548. It became a center of commerce after the construction of the Frauenkirche between 1726 and 1743. The buildings around the square suffered damage during many European wars with Prussia culminating in its almost complete destruction in 1945 during World War II. During the communist era, little was done to restore the buildings in the square.

After the unification of Germany, the restoration of the Frauenkirche marked the beginning of efforts to rebuild the square to its pre-1945 splendor. Reconstruction efforts have resulted in completely resurrecting the area. Today shops and restaurants line the restored portions of Neumarkt Square, giving visitors plenty to do as they stroll along the square.
Image by L.E.rewi-sor on Wikimedia under Creative Commons License.
Sight description based on wikipedia