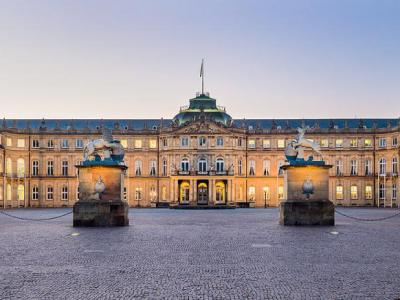 The New Castle is a building which stands on the south edge of Schlossplatz, the central square in Stuttgart, Germany. The castle is built in late Baroque style. From 1746 to 1797 and from 1805 to 1807, it served as a residence of the kings of Württemberg. The castle, which is more of a palace, stands adjacent to the Old Castle. The castle was almost completely destroyed by Allied bombing during the Second World War and was reconstructed between 1958 and 1964. During this time, most of the inside of the castle was also restored and the building was used by the Baden-Württemberg State Parliament. Today it is used by the State Ministries of Finance and Education.
Image by Mussklprozz on Wikimedia under Creative Commons License.
Sight description based on wikipedia