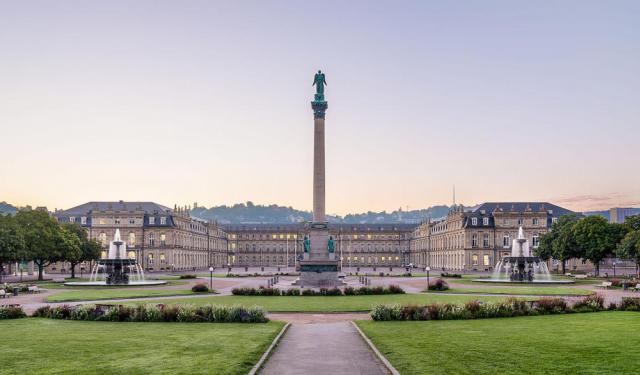 Despite being almost completely destroyed during World War II, Stuttgart boasts a wealth of quite impressive historical architecture. In the city center, carefully rebuilt after the war, you will find a mix of centuries-old castles, churches and other attractive buildings fit to impress anyone with their beauty and peculiar features.

For some serious architectural appreciation of Stuttgart, Schlossplatz is a good place to start. This spacious public square is a home to the Neues Schloss (New Castle), one of the last grand palaces built in the city; its construction lasted from 1746 to 1807.

Among Stuttgart's key landmarks there are some very old, such as the Stiftskirche (Collegiate Church) – Württemberg's first Gothic-style Romanesque basilica, originally constructed between 1276 and 1293. The impressive Altes Schloss (Old Castle), dating from the 10th century, once served as a residence for the Counts and Dukes of Württemberg; now home to the Landesmuseum. The hall-type, Gothic-style Leonhardskirche (Leonard's Church) is Stuttgart's second oldest church, first built in 1337.

Domkirche St. Eberhard (St. Eberhard Cathedral) – home to one of the largest and most important organs in Germany; built between 1808 and 1811;

Königsbau (King’s Building) – an impressive classical edifice, constructed between 1856 and 1860;

Prinzenbau (Prince’s Building) – seat of the Ministry of Justice; dating from the 1600s;

Alte Kanzlei (Old Chancellery) – a mix of Classical and Renaissance styles; originally built between 1544 and 1546; the former seat of the Württemberg Kingdom's government today houses offices of the Ministry of Justice and some other establishments.

To explore these and other historic buildings of Stuttgart in more detail, take this self-guided walking tour.
Image Courtesy of Wikimedia and Julian Herzog.
How it works: Download the app "GPSmyCity: Walks in 1K+ Cities" from iTunes App Store or Google Play to your mobile phone or tablet. The app turns your mobile device into a personal tour guide and its built-in GPS navigation functions guide you from one tour stop to next. The app works offline, so no data plan is needed when traveling abroad.

Construction on the New Castle began in 1746, and work continued until 1807. The castle was built to provide a royal residence for 16 yr old Duke Charles Eugene of Württemberg. The Duke wanted an impressive palace that would rival Versailles and threatened to move to Ludwigsburg if a suitable palace wasn't built.

Unfortunately, the construction faced many delays, including the death of the master builder and a fire during construction. As a result, the palace wasn't completed until after Duke Charles Eugene's death.

The palace is one of the last large palaces built in the area. It is mostly in Baroque style and features three main wings. Because of the lengthy construction time, the Baroque style was complemented by Rococo and Classicism styles. The facade features sculptures on the balustrades.

Duke Friedrich II became King in 1806 and redecorated the interior in the Imperial Style. The palace continued to house the kings of Wuerttemberg until King Wilhelm II abdicated in 1918. Former Federal President Richard von Weizsäcker was born in an attic apartment in the palace in 1920.

World War II bombs heavily damaged the palace, which was reconstructed from 1958 to 1964. Today the castle houses government offices.

St. Eberhard Cathedral is a Catholic Cathedral dedicated to Saint Eberhard of Salzburg. The cathedral was built between 1808 and 1811. The church was damaged by World War II bombs and rebuilt.

In 1978, the church was promoted to co-cathedral. The promotion coincided with the Roman Catholic Diocese of Rottenburg-Stuttgart's 150th anniversary. The main cathedral remains Rottenburg Cathedral.

For centuries, the existence of a Catholic church has been based on the religious views of the House of Württemberg. The Württemberg family converted to Protestantism and banned Catholicism from 1535 to 1555. The Holy Roman Empire won against Protestant forces in the Battle of Nördlingen, and Stuttgart became Catholic again. The Jesuits then took control, and Catholicism returned. However, when the Treaty of Westphalia was signed, Catholicism was again banned. When the Kingdom of Württemberg became secular, Catholicism was permitted again.

The cathedral features a famous organ, built by Winfried Albiez in 1982. The organ has 56 stops and 3700 pipes and is one of the largest and most important organs in Germany.
Image Courtesy of Wikimedia and Enslin.
3

The King's Building was badly damaged during World War II and was rebuilt in 1959. The building was home to the Stuttgart Stock Exchange from 1991 to 2002.

The King's Building Passages has five floors and an underground parking area. The Food Lounge has over 30 different culinary options. The shopping area features international brands, a variety of accessories, beauty products, and fashion options.
Image Courtesy of Wikimedia and Schlaier.
4

Several Württemberg dukes were responsible for the Prince's Building. First, during the early 1600s, a basement and three-story utility building were built. Next, an addition to the building closed off Schillerplatz (Shiller Square).

At the end of the 1600s, Matthias Weiß rebuilt the building in the classicist style. Philipp Joseph Jenisch and Johann Friedrich Nette added an extension to the building in 1722 and updated the building's facade to the Italian style.

The building features five portals, including two main portals. Architect Alexander von Tritschler restored the two main portals in 1878. These restored portals each feature a double-leaf, wooden arched door. One of the main portals features The Württemberg coat of arms.

A water tank was attached to the building until 1862 when it was replaced with a statue of Mercury. The gold-plated Mercury statue represents the ancient god of trade and was based on a design by Giovanni di Bologna of Florence. The Old Chancellery was rebuilt again in the 1950s after World War II bomb damage.

The Old Chancellery served as the seat of administration and government of the Kingdom of Württemberg. Today, the Old Chancellery is home to a restaurant, a farm pharmacy, and Ministry of Justice offices.
Image Courtesy of Wikimedia and Joachim Köhler.
6

The Old Castle dates back to the 10th century. This impressive structure served as a residence for the Counts and Dukes of Württemberg. In 1325, the Dürnitz building was built. In the mid-16th century, Dukes Christoph and Louis III made various additions. The additions included an equestrian staircase, the church, and the conference room. During this renovation, the castle was redecorated and became a renaissance palace. In addition, the moat was filled during the 18th century.

The castle's arcaded courtyard features beautiful Italian Renaissance motifs. A memorial to Eberhard I stands in the inner courtyard. King Charles I of Wurttemberg is buried underneath the castle church.

A fire damaged the castle in 1931, and a World War II bomb caused further damage. Reconstruction was completed in 1962.

The Old Castle is home to a memorial exhibition commemorating Claus von Stauffenberg, a Stuttgart resident who attempted to assassinate Hitler.

The Wuerttemberg State Museum is located in the Old Castle. King Wilhelm I founded an art chamber in the 16th century, and the ducal interest in collecting priceless items continued throughout the centuries. Today, visitors can find royal diamond jewelry, the royal crown, and scepter on display. The museum portrays the area's history from the stone age to the Celts, Romans, middle ages, and more recent times.
Image Courtesy of Wikimedia and BuzzWoof.
7

Research shows that a church has stood on this site since the 10th century. The current church was originally constructed between 1276-1293 and underwent additional construction from 1471-1493. Collegiate Church was Württemberg's first Gothic-style church.

Ulrich I, Count of Württemberg, and his wife were buried in the south chapel in 1265.

The interior contains several significant features. The baptismal font dates to 1472. Master Hanselmann created the stone pulpit in 1504. Heinrich Schickhardt designed the gorgeous carvings in the choirstalls in 1517. The church also features the oldest rose window in the region.

After the Lutheran Protestant Reformation in 1534, pictures and altars were removed from the church. Church leaders added pews and a gallery. In 1574, the church began adding statues of all the Counts of Württemberg to the chancel's north wall. A burial vault was added in 1608, and Württemberg's rulers were buried here. The Baroque onion dome replaced Gothic towers in 1749.

The church underwent renovations during the 1800s. Collegiate Church sustained damage during World War II bombs and was rebuilt in the 1950s.

Collegiate Church is home to the Herrenberg Bell Museum. Visitors can climb the medieval spiral staircase and examine an extensive collection of bells. The museum features 30 bells whose ages span across 12 centuries.
Image Courtesy of Wikimedia and BuzzWoof.
8

Leonard's Church is Stuttgart's second oldest church. A chapel dedicated to St. Leonard was built on this site in 1337. The chapel was soon replaced by a small church with a single nave, a choir, and a tower.

Alberin Jörg expanded the church between 1463 and 1466. The expansion converted the church into a Gothic three-aisle church with a choir and tower. Unfortunately, the church was damaged during World War II and rebuilt between 1948 and 1954. Eleven of the original 21 keystones were saved from the rubble. Five of these keystones are displayed in the choir, and six are located on the nave walls.

The interior has many interesting features. Johannes Reuchlin, an influential humanist, was buried in the church in 1522. His tombstone, along with a marble medallion, is located in the choir. Visitors will also find a bronze statue of Johannes Reuchlin on the staircase.

The altar shrine features four figures and dates to around 1470. The choir stalls date to 1490 and feature 57 seats. Visitors will also notice a chiseled portrait of a monk that dates to 1490.
Image Courtesy of Wikimedia and Joachim Köhler.

Stuttgart is the capital of Baden-Württemberg, a German state that is often referred to as BaWü or BW. Stuttgart has a large metropolitan area, and the city is known for its high quality of living.

The area's fertile land has attracted settlements for centuries. The Romans settled here in AD 83. During the 10th century, the Duke of Swabia used the area to breed warhorses. The town grew...  view more

When it comes to quality shopping, Stuttgart is a great destination to consider. The city's main shopping area, Konigstrasse, offers a plethora of high-end stores and souvenir boutiques. Take this self-guided tour to experience the best shopping in town and take home some memorable gifts from Stuttgart.