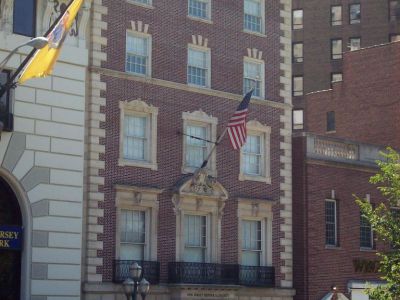 Exhibitions can be found on the second and third floor while the library reading room is housed on the fifth floor, formerly the Essex Club squash courts. The Society is open to the public. Members are free, while non-members pay an admission fee. Patrons visiting the library are encouraged to make an appointment.

The society was founded in 1845 at Trenton by intellectual and business leaders of New Jersey, most prominently Joseph C. Hornblower, Peter D. Vroom and William Whitehead. Its original headquarters in Newark were located on Market Street, In 1931 it left Downtown Newark for a large colonial-style building partially paid for by Louis Bamberger in Broadway, east of Branch Brook Park.

In 1997 the Historical Society returned downtown, to 52 Park Place, on Military Park. The new home is a Georgian style building vacated by the Essex Club that was designed by Guilbert & Betelle. The building was built in 1926 and had been added to the National Register of Historic Places on February 22, 1991. In its first year in the downtown location visits increased almost fivefold.
Image by USVIZION on Flickr under Creative Commons License.
Sight description based on wikipedia