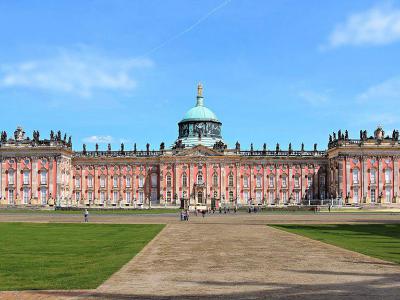 The New Palace is a palace in Sanssouci Park. It was built at the behest of Frederick the Great in order to celebrate Prussia at the end of the Seven Year's War.

Construction on the New Palace began in 1763 and was completed in 1769. It was designed by architects Johan Gottfried Buring, Heinrich Ludwig Manger and Carl von Gontard in the Baroque and Rococo architectural styles. Frederick the Great insisted that the palace be overly adorned with marble, stone and gilt to show the wealth and success of Prussia.

Built with more than 200 rooms, the New Palace was not used as a primary residence but as a place to meet dignitaries and other royals. Frederick the Great kept a suite at the New Palace for his occasional stays. The suite includes two antechambers, a study, a dining salon, a concert room and a bedroom.

As a lover of art, Frederick the Great insisted the New Palace be decorated with fine pieces from well-known artists of the time. The palace had over 400 sandstone statues by sculptors such as Johann Peter Benckert, Johann Matthias Gottlieb Heymuller and brother Johann David and Johann Lorenz Rants.

The New Palace underwent a series of changes over the years. For instance, in the early 19th century, Frederick III had a moat dug around the palace. At the turn of the century, Wilhelm II had steam heating and electric chandeliers installed. After the November Revolution, the New Palace became a museum.

Little damage was done to the New Palace during World War II. However, the Soviet Army looted the palace and removed much of the art and furnishings. For more than two decades, those items were lost. In the 1970s, most of the furnishings were discovered still in packing crates and in excellent condition. They were returned to the palace, which has allowed it to retain the appearance it did prior to the war.

The New Palace was designated as a UNESCO World Heritage Site in 1990.
Image Courtesy of Wikimedia and Angel Miklashevsky.