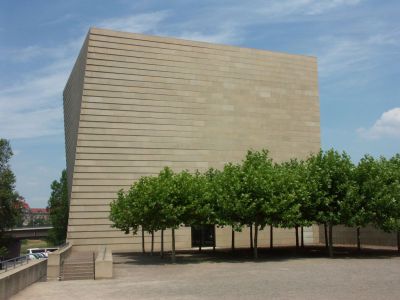 The New Synagogue in Dresden was built in 2001 at the location of the well known old Synagogue. The old Synagogue was burned by the Nazis in 1938 during the infamous Kristallnacht when hundreds of synagogues in Germany and Austria were ransacked and razed. The new synagogue is a new modernist building unlike other restored buildings in the location that maintain their Baroque architectural style.

The old synagogue that once stood at the location of the new Synagogue was designed by well known Dresden architect, Gottfried Semper. It was called the Semper Synagogue and was built between 1839 and 1840. The boundary walls of the new synagogue are the last remaining portions of the building designed by Semper. After World War II efforts and contributions from around the world especially that of Gunter Globel, the 1999 winner of the Nobel prize for medicine helped the small Jewish community in Dresden to establish a new Synagogue. The new structure was completed in 2001. The building was designed by architects, Rena Wandel-Hoefer and Wolfgang Lorch. The architecture resembles the first Israelite temples in Jerusalem with a square shape and no windows.

The sanctuary building is a cube like structure with a square space for worship. Chain mesh curtains are hung all around giving the interiors a rich finesse. One of the relics preserved from the old synagogue is the Star of David that was saved by a fireman during Kristallnacht and returned to the Jewish community after the war.

The structure is a monument to survival despite one of the worst acts of sectarian carnage in history.
Image by rs-foto on Flickr under Creative Commons License.
Sight description based on wikipedia