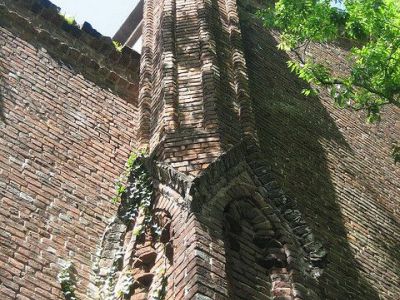 Constructed in 1859, the New Tabernacle Fourth Baptist Church is a prime example of Gothic Revival architecture in Charleston. It was initially used by the St. Luke's Episcopal congregation in the Mazyckborough-Wraggborough neighborhood.

The church was built in a Greek cross layout, but the planned steeple was never completed. Inside the building, soaring Gothic vaults resting on quatrefoil columns support the central 55-foot ceiling. The galleries are decorated with Gothic style spindle work and quatrefoil center panels.

The building, despite being damaged by shelling and stripped by Union troops during the Civil War, was used continuously by the St. Luke's congregation until 1949 when it was merged with St. Paul's in Radcliffeborough and became the Cathedral of St. Luke. The New Tabernacle Fourth Baptist Church, founded in 1875, purchased the Cathedral of St. Luke in 1950. Most of the detailed elements of St. Luke's Church have been preserved despite the change in congregation.

Today the New Tabernacle Fourth Baptist Church is not only a beautiful sight and a religious place with regular services, it is also a place for various, interesting community and cultural activities like concerts, festivals and other events that are hosted here.
Image Courtesy of Flickr and BlancheK.