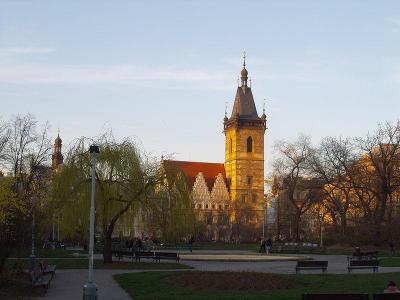 Overlooking the large green square of Karlovo Namesti is the New Town Hall (Novoměstská Radnice), a medieval complex with the Eastern wing, facing Vodičkova Street, being the oldest, built around 1377, and the Southern wing, overlooking Karlovo náměstí, added in 1411-16. The latter was revamped in Renaissance style in 1520-26 and then furnished with late-Baroque gables. Several additions to the Hall were made in the 15th century, including the sturdy tower with an intimate Gothic chapel and a massive bell. The Eastern wing also underwent Renaissance reconstruction in 1559.

Over the centuries, the Hall has witnessed many historic events, including the first of three so-called Defenestrations of Prague, on July 30th 1419, when the crowd broke in and threw the burgrave, two aldermen and several burgess representatives out of windows onto the crowd’s spears. The event marked the beginning of the Hussite revolution. In 1609, representatives of the Bohemian nobility met here to force Emperor Rudolf II to issue a decree that would guarantee religious freedoms.

The Hall remained the seat of the New Town government until Emperor Josef II merged the four towns of Prague in 1784, upon which the Hall was converted to courthouse and prison, eventually dubbed as Prague’s Bastille. Two wards of the ground-floor prison are named after their first inmates, Polévka (soup) and Jelito (pork-blood sausage).

The most significant reconstruction of the Hall, in 1904-05, removed traces of the Classicist reconstruction from the early 19th century and restored the previous Renaissance appearance from the early 16th century. The most recent overhaul, in 1976-96, saw the premises adapted to the needs of the Prague 2 Municipal Office, as well as exhibitions, concerts and social events. There is also Café Neustadt in the courtyard. In 1962, the New Town Hall was declared a national cultural monument.

Guided tours of the New Town Hall visit the Large Hall, the Wedding Hall, Maazhaus, and the Gothic chapel.