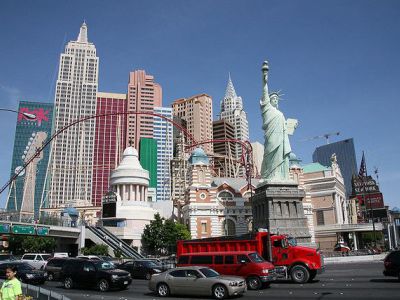 For those of you who have never seen Manhattan, go and have a look at New York-New York Hotel and Casino, which is a scale model of the great city.

The hotel is designed to look like the New York skyline and is made up of several towers resembling the Chrysler Building, the Empire State building, and the Public Library. In front of the building, a large lake represents New York Harbor, complete with a 46-meter replica of the Statue of Liberty, and replicas of the immigration office on Ellis Island, Grand Central Terminal, the Whitney Museum of American Art and the Soldiers and Sailors Monument.

The “New York” theme is carried on inside with many of the gaming rooms, restaurants, lounges and conference rooms named after landmarks and monuments in the Big Apple – the shopping area is modeled after Greenwich Village, complete with cobblestones and graffiti!

For amusement, apart from the large casino, there is an ESPN Zone, a “Sporting House” restaurant with interactive games including bowling, horse racing, golf, and boxing. A roller coaster roars around and through the hotel and casino, with its cars designed to look like the famous Checker Cabs.

There are nightclubs, restaurants and several bars where dancing on the table and singing along with the music is all part of the fun. The theater is partly set up in cabaret style with squashy sofas and high bar stools. If you are over 18 years old you can take in the Cirque du Soleil’s “Zumanity” show.
Image Courtesy of Flickr and cliff1066™.
Sight description based on Wikipedia.