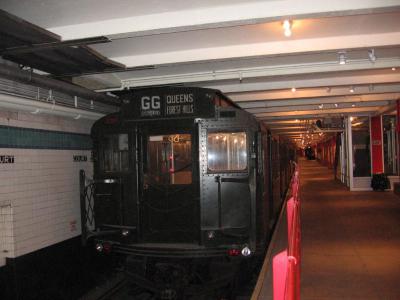 The New York (aka NYC) Transit Museum on – or rather under – Schermerhorn Street in Downtown Brooklyn is dedicated to the history of New York's transport system, and is located in an actual subway station – Court Street – currently decommissioned, in Brooklyn Heights on the Fulton Street Line. The museum displays historical artifacts of the New York City Subway, bus, and commuter rail systems in the greater New York City metropolitan region.

On July 4, 1976, the New York City Transit Exhibit was opened as part of the United States Bicentennial celebration, featuring old subway cars which had been preserved, as well as models and other exhibits. Originally planned to run until September 7 of that year, the venue proved so popular that it remained open and eventually became a permanent museum.

As you head down the stairs into the beautifully renovated 1936 underground station, you'll be met with an incredible array of vintage subway cars, exhibitions about the underground tunnel systems and the people who built them, plus antique street-level buses and trolleys. There are also fascinating displays of ticket machines, fire hydrants, and signage.

The museum's mezzanine (upper) level contains the majority of the exhibits, restrooms, water fountains, a gift shop, and a dining space for visitors who have brought their own food or drink (none is for sale onsite). Artifacts from historic subway and bus operations, as well as NYC transportation infrastructure, are on display. The exhibits on the upper level are changed from time to time. In addition, there is a small presentation screening room which usually displays posters and videos for public education about courtesy and safety, including examples from other transit systems around the world.

Tip:
If your visit to Downtown Brooklyn falls between Thanksgiving and New Year, don't miss the Nostalgia Train and taking a ride on one of the vintage, but fully operational, 1930 R1/9 cars through nine stops on the subway system.