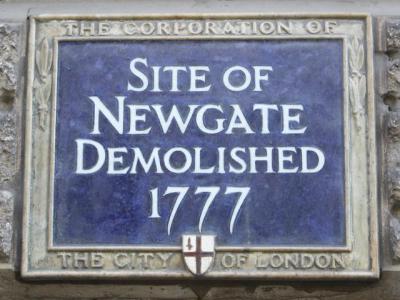 A notorious prison that once stood on the corner of Old Bailey and Newgate Street, at the original site of a gate in the Roman London Wall, Newgate was London’s main prison infamous for public executions held outside and drawing large crowds. Built in 1188 and demolished in 1902, the prison was extended and rebuilt many times throughout its 700+ year service.

Dickens was fascinated by prisons all through his life and campaigned powerfully for the executions to be taken inside the prison walls. He was alive when the legislation requiring that was finally passed in 1868. Passionate social critic as he was, Dickens visited Newgate several times and on 6 July 1840, together with his friend and fellow writer William Makepeace Thackeray, witnessed a public hanging of François Benjamin Courvoisier.

Dickens also mentions Newgate in a number of his works, namely:
- In the 1836 sketch "A Visit to Newgate" (written for inclusion in the collected work Sketches by Boz).
- In the "Oliver Twist" novel, he describes Fagin’s last night alive in Newgate, and Oliver's witnessing his hanging.
- In "Barnaby Rudge", Hugh, Dennis, and Barnaby are imprisoned at Newgate in cells refitted after the prison was burned down during the Gordon Riots in 1780.
- In "Great Expectations”, Wemmick and Pip visit the prison while Pip is awaiting the arrival in London of Estella.
Image by Christian Lüts on Flickr under Creative Commons License.
Sight description based on wikipedia